A Quindell Christmas Carol …part one 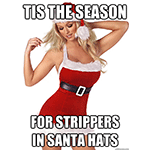 It was the night before Christmas and all was still at the Country Club, Rob Terry called home. The great man himself had decided to call it a day early and was lying (as is his wont) on his enormous four poster bed. Young Mrs Terry had said that she was going out with girlfriends To S.Daddy, a new nightclub in Southampton and so Rob’s only companions were his two faithful poodles Canakos and Cencord who lay snoring at the foot of his bed.

The two watchdogs were definitely off duty that night, as every night, but Rob himself was finding it hard to fall asleep. He tried counting sheep. 1 + 1 makes 2, 2+ 1 makes 3, 2+ 2 makes 5, it went on but to no avail. Pulling on a Quenron corporate Christmas Jumper