I have been greatly distracted not least dealing with this utterly brain dead and vile Cloudtag (CTAG) shareholder who has been spamming me with the most ghastly abuse all day. I look at the Bob Diamond bid for Panmure Gordon (PMR) and what it means for the wider broking/corporate advisory sector. I then turn to Premaitha (NIPT) and the wider issue of the pointlessness of commissioned research. I touch on Management Resource Solutions (MRS) in light of the news earlier HERE but now the way it is really trying to screw shareholders with a 5p placing. There is comment on Jubilee Platinum (JLP). Then it is back to two old favourites: Advanced Oncotherapy (AVO) and Milestone (MSG). Woof Woof.

Robert Sutherland Smith is again proving that he is still alive with another guest post. Robert started his City career the year before I was born and is, I think, 157 years old. Fear not. He is very much alive and kicking. He and I have worked together for almost eight years at t1ps.com . He is my friend and he is a very funny and intelligent chap. He is now branching out to celebrate his 158th by doing some freelance writing over  at various places ( including Shareprophets.com naturally) on FTSE 350 Income stocks. Robert is a speaker at the UKInvestor Show on April 5th 2014. He is a great one for focussing on yield. RSS today looks at HSBC. RSS writes:

The two big relative attractions of HSBC (HSBA) as a bank are its recent  historic steadfast holding to its culture and its subsequent capital strength.  The culture enabled it to steer the ship without tax payer help through the  storm of the banking crisis. It also persuaded the US Justice Department to keep  a recent fine it imposed of $1.3 billion for money laundering, at the lower end  of what was allowable, because it concluded HSBC management had the right  attitude. No need, as at Barclays, for an internal moral rearmament campaign to  return it to a more overtly ethical approach to business in the new post Bob  Diamond world. At HSBC it seems to have survived like DNA in the corporate  fibre.

I have banked with Barclays all my life as has my dad and as did his dad. I worked there for a while. And so it is pretty hard for me to contemplate moving – I am not a hard customer to retain, there is a lot of inertia. So when the new CEO of Barclays, Alan Jenkins, writes to his staff saying that they should think about their customer’s feelings, I dismiss it as PR blather. Of course it is nothing more than that from the man who replaces bankster Bob Diamond. Barclays treats its customers like shit, just like all the other banks – as I am finding to my cost right now. I am thinking I may move not because the staff do not think about my feelings but because they are useless.

The biggest driver of traffic here this week was the article discussing the views of the late Ayatollah Khomeni on bestiality. But it is hard to think of a suitable caption competition which might not offend just too many people. And so, with regret we return to dumb and dumber, drug obsessed and uber-authoritarian, MP Louise Mensch. The picture is below and always tweet your entries to @tomwinnifrith by 4 PM Monday to win one of our Piss off Argentina mugs. 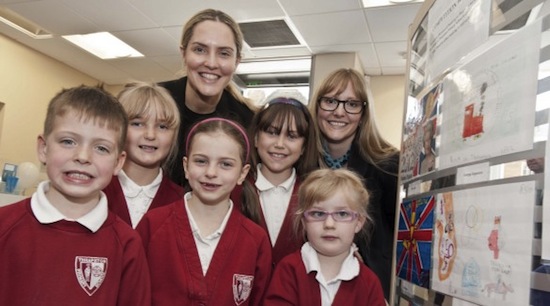 My entry: Kid One: “So where did you put the dope then?” Kid Two – “she’s standing at the back”

Last week’s I asked for a caption for this photo

Our Judge, a man who is shown to have excellent judgement because he says I “look good” decided that the wittiest entry was Yes, I did say that Barclays was number one for fixed rates, which came from your very own travelling correspondent in the Balkans. And so no prize awarded.

Better luck to you all this week

Yesterday after some bloke no-one has ever heard of quit as Barclays chairman I wrote:

Barclays is no doubt paying some bright PR firm megabucks to “manage this crisis.” So the company started with the idea that Diamond would forego his bonus this year. Now we have the bloke whose name I have already forgotten walking the plank even though he had no idea what was going on. And this afternoon we are being fed the line that the regulators knew about what was happening and thought it was a good idea. This is all aimed to distract us from calling for the head of Bob Diamond.

The banksters at Barclays have today been found guilty of  what is, in effect, market abuse. They deliberately worked systematically to manipulate the LIBOR rate and so screwed millions of customers out of millions of pounds.  This is just dreadful and Barclays shareholders will now pick up a bill of £290 million to clear up the mess. The scumbag who runs Barclays, Bob Diamond, and a few senior colleagues have agreed to forego their bonuses this year as part of the mea culpa. But that is not enough. Diamond should go.