Happy Birthday to TomWinnifrith.com -now five years old: my 20 most read articles on this website

"Congratulations on your anniversary" said a raft of messages from folks I once knew, barely know or don't know at all but who are connected to me on facebook for grown ups, that is to say LinkedIn. Er ....what thought I... what anniversary?

The loathsome Margaret Hodge has put down a motion of no confidence in comrade Corbyn as leader of our great Labour party. It is obscene that a millionare, whose family trusts use every trick in the book to dodge tax, and who as leader of Islington council branded as homophobes those who exposed the industrial scale peadophilia taking placing in Council homes on her watch, is a Labour MP at all. What message does that send out to the millions of traditional Labour voters who are abandoning the party in droves? Anyhow, the nonce apologist, is now playing Judas.

Ed Miliband wants the Government to step in and at least investigate if not block the proposed purchase of AstraZeneca (AZN) by Pfizer. He is wrong and showing a touch of UKIP style nastiness to boot.

The leader of the Labour Party reckons that takeovers of big UK firms by foreigners should be checked out to see if they are in the National Interest. He hints that Pfizer have a poor record of cutting jobs post takeovers. To paraphrase: They are foreign and nasty foreigners to boot. If Pfizer buys AstraZeneca jobs of British workers are at risk. It sounds almost like something you might hear from UKIP. It is unpleasant and it is also just plain wrong.

Friday Caption Contest on a Sunday – The appalling BBC Edition

Having seen clips from last week’s Question Time and some of the coverage of the Red Ed vs. The daily Mail issue, I wonder if the BBC has plumbed new depths. Mired in new scandals over payouts for failure, sex crime cover ups and much more besides the real issues are:

Firstly that the taxpayer funded broadcaster produced either the sort of rubbish (everything on Radio 1 for example) which should be the domain of the private sector. If there is a demand for this sort or garbage why should the taxpayer subsidise it? If not then since it is rubbish why produce it at all?

And secondly that the news coverage is anything but impartial. How the audience cheered as the panel bashed the Mail on QT? How the BBC ignored both the facts of this non story and also the double standards in the way that Red Ed had treated those who gloated over the death of Thatcher? Why should my taxes fund propaganda? By the way is the BBC still insisting that the planet is heating up thanks to global warming?

As such I invite your captions for the picture below My own feeble effort is:

Comrades!" he cried. "You do not imagine, I hope, that we pigs are doing this in a spirit of selfishness and privilege? Many of us actually dislike milk and apples. I dislike them myself. Our sole object in taking these things is to preserve our health. Milk and apples (this has been proved by Science, comrades) contain substances absolutely necessary to the well-being of a pig. We pigs are brainworkers. The whole management and organization of this farm depend on us. Day and night we are watching over your welfare. It is for YOUR sake that we drink that milk and eat those apples.

In that spirit I bring you evidence of how those leading lights among those elected to serve us spent the weekend sitting in the best seats at Wimbledon at no cost to themselves. My caption for this picture is

Miliband, Call Me Dave and that fat Scottish git saying “taxpayers, you do not imagine that we are in the best seats at Wimbledon at your expense because we like expensive freebies. In fact we all hate tennis and free drink. But supporting Andy Murray, it has been proved by scientists, makes us more able to deal with the deficit, problems in Syria, immigration and the EU. It is for your sake that we are here.”

If you have a better caption please post it in the comments section below.

Last week I asked you for your captions for this picture of five of those fine fellows that William Hague wishes to send guns to, assuming they are not back in Britain at the time beheading soldiers or blowing up buses.

So Labour is bankrolled by the Unions…er what’s the news? And who cares?

Am I missing something from afar? I read that the Unite Union gives Labour vast amounts of money and now stands accused of trying to rig selection meetings in safe seats so that crony candidates who believe in thinks like workers’ rights and all those terribly passé concepts of the 1970s get picked. Heck so what is the news?

We always knew that Labour was bankrolled by the Trades Unions. It must have been a bit galling for the Unions to pony up only to see a bunch of Middle Class privileged young men ignore a vast amount of what they were promised. And so the Unions now want to ensure that MPs they bankroll can be relied upon to do the right thing. I.e. the wrong thing.

I spotted the other day a CV of a contemporary of mine from Oxford.

My partner is a lifelong deluded lefty. She has always voted for the People’s Party. But I can report a mini triumph of a shift away from the loons here in the Clifton Ward of Bristol.

Naturally my partner would rather drink her own urine than vote for the wicked Tories. The Lib Dem’s murdered a forest of trees in an attempt to win support for their ageing hippy of a candidate. But however many new park benches this old fool has managed to get set up around here my partner cannot forgive the Lib Dems for being in coalition with the wicked Tories so that was a non-starter.

And that left the People’s Party (no leaflet) and a nice young man with a Polish name standing for UKIP. He promised to end political correctness on the Council which I though sounded like a good idea although my partner was not so sure. And he also promised to end immigration from Eastern Europe. I guess he doesn’t like his relatives much.

Will Ed Miliband Celebrate the Death of Margaret Thatcher?

Imagine what the BBC or its sister paper The Guardian would say if a Tory or UKIP politician was seen next to a t-shirt looking forward to the death of an icon of the left: Tony Benn, Dennis Healey or perhaps Nelson Mandela. There would be immediate calls for resignations and public grovelling.

For those of us on the right, our iconic figure is Margaret Thatcher yet it is deemed perfectly acceptable in some quarters to look forward to her demise. The Labour candidate in the Eastleigh by-election has (shamefully) admitted that he was sorry that the IRA did not kill her in the Brighton bomb. And so this little snap of Labour leader Ed Miliband posing with a Labour supporter emerges. 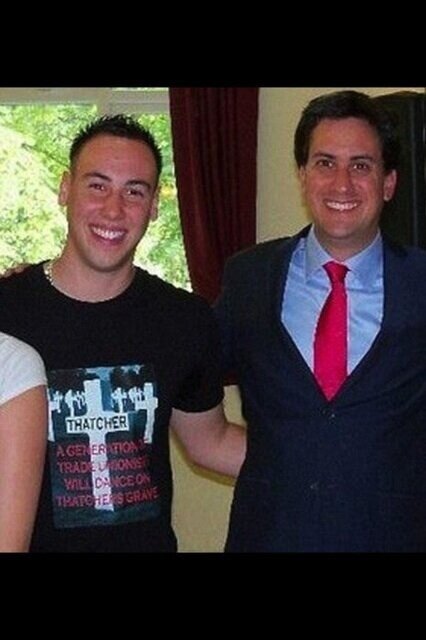 Ed, I believe in free speech so this dickhead can wear what he likes. But just to clarify matters for me: do you look forward to the death of our greatest ever Prime Minister? Do you believe that those who admit to doing so publically have a place in the Labour party? Easy questions.

UKIP Triumph – A tipping Point? And the Establishment spin and dirty tricks

UKIP was never going to win any of the three by-elections last night. The mainstream press knew that but happily suggested it might in order that the political and media establishment in the Westminster bubble could say that UKIP had not done as well as expected. UKIP is not a party of the establishment and it will thus get no favours from the established media. The way that papers such as the Telegraph took the spin from the established parties is the sort of dirty trick UKIP will have to get used to as it grows. And it will grow.

I write this not as a UKIP member or indeed committed supporter. Pro tem I am clearly a sympathiser. I think that the party has a good few loons in its ranks. Don’t they all? It strikes me that it can appear not to be libertarian at times on social issues. That may be unfair on it, but it is the impression one gets. However on a range of issues, notably the EU, smoking in public places and deficit reduction it is, for me, bang on the money. And though it wants to have MPs, right now it has nothing to do with the sleaze club of Westminster to which the other three main parties all belong.

This is pinched from website Darth Meerkat and deserves a wider airing:

Ed Miliband walks into a bank to cash a cheque. “Good morning”, says Ed, “could you please cash this cheque for me?”

Cashier: “It would be my pleasure Sir, but could you please show me some identification?”

Miliband: “Truthfully… I did not bring my ID with me as I didn’t think there was any need to. But hang on! I’m Ed Miliband, Leader of the Opposition and of the Labour Party!!!”