I have noted in an earlier piece why I am delighted, if a bit surprised, that Ashers bakery in Belfast has won its court case, allowing it not to be forced to bake cakes carrying political messages with which it disagrees, in the case in support of gay marriage.  As the great Peter Tatchell showed, backing the Christian bakers does not make you a bigot just someone who believes in key civil liberties.

A few weeks ago the US Supreme Court threw out a case brought against a baker who had declined to bake a cake for a gay wedding. Though the owner of the Masterpiece Cakeshop was happy to bake cakes for gay folks he, being a Christian, did not wish to be party to a celebration of something of which he did not approve.  Oddly in the UK the Courts backed the gay couple but in the US the Courts accept that the State has no right to force a business to serve anyone. The liberal left moaned, wailed, shrieked and hurled abuse. This was outrageous they claimed - no business should be allowed to turn away customers on the basis of belief. It was not that the customers were gay it was that the cake ordered was for something the owner did not believe in. But the liberals said that did not matter.

Tim Farron was a pretty hopeless leader of the Lib Dems. His weasel words and demands for a second vote on Brexit were laughable and the way that he kept on insisting that he was the only working class ( pronounced with no r) was just plain cringe worthy. But the reason that he has quit as Lib Dem leader is that in modern Britain being a Christian is not acceptable, at least to the fake news wolf packs of the liberal metropolitan media.

It has started already. The DUP, from God's chosen land of Ulster, will back the Tories and we might just have stable Government for a while. The liberal media elite who are reporting Jeremy Corbyn's "victory speech ( hint Labour lost) is enraged. The knives are out for the DUP for they stand for everything that London millionaires despise.

Andrea Leadsom's real problem is that she is a liar, her trump card is how vile are those who hate her

I picked up yesterday on the fact that Andrea Leadsom views gay folks as different to straight folks in terms of their rights to suffer the miserty of marriage. So she is a social conservative which will chime with many Tory party members and I've no problem with her coming out in this respect. These days, some leading Tory seems to come out as something or other about once a week. What is nauseating about Leadsom is that she lies about this issue. She says she believes in equality and then smailes inanely. Yet her stated views make it clear that she does not believe in equality. In the world of Leadsom it is one rule for the shirt lifters and one rule for the rest of us. Time to smile inanely again Andrea.

My biggest problem with Leadsom is thus not that she is a bigot, although

Andrea Leadsom - is it time to come out and admit you are a bigot?

I see that team Andrea Leadsom is insisting that she is a progressive sort of lady who believes in equality when it comes to homosexuality. On twitter today those who say otherwise are accused by her supporters of smearing Mrs Leadsom. How dare they? What nasty bum bandits you are, stop being so beastly to Andrea.

The bigoted Ulster cake makers Ashers and our silly laws

Ulster cake makers Ashers were today penalised and ordered to pay £500 compensation to gay rights campaigner Gareth Lee becuase they discriminated against him by refusing to produce a cake proclaiming support for gay marriage.  Ashers is run by devout Christians who claim this is a matter of conscience.

I tend to think that Ashers is run by bigots but they risk their own capital running a shop and so should be free to sell to whom they want. Other cake shops will produce cakes celebrating gay marriage so it is not as if Mr Lee could not use his pink pounds to get a cake anywhere.

It is entirely likely that thanks to Labour dirty tricks, that is to say the Mrs neglecting to put me on the electoral roll, I shall not be able to vote at all this week. We will troop over to the polling station near her old flat on Thursday and find out.

If I can vote what should I do? As a dyed in the wool Eurosceptic and someone who believes that the entire political class should be strung up with piano wire my natural inclination is to vote UKIP. After all the European elections do not really matter do they? My guess is that enough folks will view it this way to ensure that Mr Farage and his supporters will be celebrating triumphs in both the local and European elections as I explained HERE earlier.

I do not care if UKIP contains more than a smattering of prize loons that does not deter me.

However, I find that when Mr Farage moves away from Europe, where I agree with him 100%, to other matters I get rather agitated. He is clearly now trying to appeal to traditional Labour voters and so he supports a minimum wage (a tax on jobs) and there is talk in UKIP circles of backing the living wage.  This is not a pro-business agenda but it will also not assist the poor since it will destroy jobs.

Liam Fox reminds me: V for Vendetta – Time for an annual viewing

It is perhaps not the greatest film ever made but for those of us who instinctively mistrust and despise the political class it is worth watching at least once a year and with November 5 approaching now is as good a time as any.

The squalor of the 3p expense claim made by Liam Fox MP (personal wealth estimated at £1 million) just reminded me how much I loathed those who rule us. Fox wants to restrict abortion, he opposes gay marriage, he voted for a smoking ban (and then against), he voted for the illegal war in Iraq, he thinks he has a right to tell us how we should live our lives, what we should do with our own bodies. And then that we should recompense him three frigging pence because he cannot be bothered to walk 100 yards down the road.

Fox is by far and away not the most despicable member of the political class. He is merely one of many despicable members of that class who trough it big time as they make our world ever more authoritarian and unpleasant.

If you have never seen, the speech from V for Vendetta have a butchers and then get the whole movie out on DVD in time for Guy Fawkes night.

Call Me Dave on “Exporting Gay Marriage” – wrong on every count

Call Me Dave this week boasted that he wanted “to export gay marriage” around the world. I support the idea that gay men and women should be allowed to get married and divorced just like straight couples. Why should the misery of this institution be the preserve of heterosexuals? Spread the pain. But at every level David Cameron MP just shows himself up as a member of a metropolitan Elite with a particular world view which makes me despise ever more.

My starting point is that as a libertarian I believe that you have every right to do whatever you want with your own body. As such there should be no differentiation in law between gay folk and straight folk. Homosexuality, like playing Hockey, watching Golf or going to Ibiza has never appealed to me personally but whatever floats your boat. So

Since I almost never read it, I forget what a horribly awful newspaper The Independent has become. But occasionally you are dragged back by a piece just so ludicrous that you have to read it in the name of research into just how crazed some deluded lefties are. And thus I stumble on a classic by someone called Lena Corner about how a group of gays in the East End are furious with Call Me Dave for legalising gay marriage.

Eastleigh: The Message for Call Me Dave on a night of UKIP Glory, Lib Dem Relief and Tory Humiliation

The Lib Dems held on but UKIP was surging. A couple more days and UKIP would have snatched it. In the end it was wasted Tory votes that let the Lib Dems in as Call Me Dave’s party came third in what is his 40th target seat. Labour was always irrelevant here, its own disaster is not an issue.

The Lib Dems will be greatly relieved to have held onto what should be one of their safest seats albeit in very tough circumstances: Chris Huhne off to do porridge and the current sex scandal. For now Clegg hangs on but if he is shown to have lied about his knowledge in the sex pest cover up he may still face the chop. This is not the start of a Lib Dem recovery, Rennardgate may well still drag that party to Thorpe style lows.

UKIP is now coming second in both leafy southern towns like Eastleigh but also GMSH’s like Rotherham. There is a growing disgust with the entire political class and UKIP is the big winner from that. All the established parties should be worried but they are so arrogant and out of touch that the corrupt establishment will not change tack.

But the big losers right now are the Tories. As long as Call Me Dave stays as Tory leader it is only a matter of time before UKIP gains an MP. For the Tories are in trouble.

Apologies for the delay in the Friday caption contest – it is all Zak Mir’s fault.

I really cannot think of anything particularly important to prompt tasteless caption entries this week and so fall back on the issue which George Osborne says will be at the heart of the next Tory manifesto and which is guaranteed to bring the faithful back to the Conservative fold.

As you know, I would allow gay marriage. But I cannot say that it is the number one issue on my mind right now. The way that the Tory party is tearing itself apart with half its MPs revealing themselves as knuckleheaded bigots while the other half show themselves as being even more out of touch by making this such a number one priority is almost comical. If the Tories are to tear themselves apart at least they could do it over something that matters like the EU or the fact that Britain is going bankrupt.

Anyhow, to win an “It’s time to leave” T-shirt please post your captions in the comments box below (Jon Pickles, this has to be an easy Prince Harry one for you)

You can, of course, buy your own It’s Time to Leave T-shirt, hoodie, mug or thermos flask here. 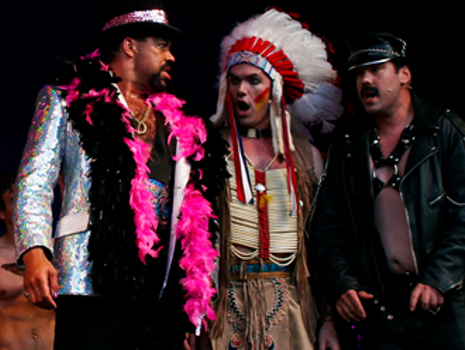