The Argie Type 42 Destroyer the Santisima Trinidad was the flagship of the invading forces the last time the Argies chose to ignore the principle of self determination and practice imperialism in the South Atlantic.

After Margaret Thatcher (rightly) gave the order to sink the Belgrano, this ship and the rest of the Argentine Navy headed back to port and sat out the military humiliation of their country in peace. The ship was decommissioned in 2004 but has sat in its full glory in port since then as a reminder of the Falklands campaign.

And this is it yesterday. Sinking faster than the Argentine economy. 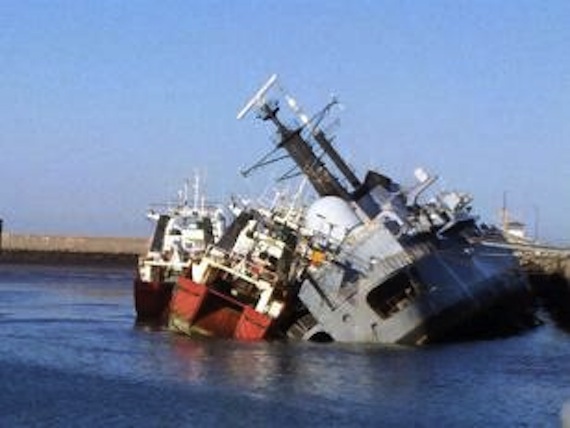 The Husband Application Form from Victoria

I find myself once again drawn to the blog of politically switched on first year student blogger Victoria by her article “Husband Application Form.” Before you accuse me of having John Peel-esque tendencies I stress that I read on only in the interests of research. Damn. That did not help Pete Townshend. Anyhow I digress.

I am, as it happens, not drawn to women too young (or to old) to name all the members of Blur or to be able to remember where they wept the day Margaret Thatcher was ousted by the Euro traitors and where they celebrated the sinking of the Belgrano.