The Graph that shouts: Wales & Northern Ireland your time is up - bugger off & take Scotland with you

The spendfest demanded by the people of Wales, Ulster, Scotland and the North of England is paid for by the hard working folks of London and the South East. That might sound like a provocative and unpleasant jibe at the expense of idle celts and workshy Northerners as they roam the welfare safaris. But it just happens to be a statement of fact as you can see below.

The graph shows the budget deficit by region - how much is taken in tax and how much spent as a percentage of the size of the economy. As you can see, in the hard working South and East Anglia there is actually a budget surplus. But elsewhere the picture is really grim.

Oddly those in the biggest deficit regions demand more Government spending to tackle poverty. It is quite clear that what they need is less Government intervention and more raw capitalism. But that is not the zeitgeist in the Northern Welfare safaris or the Celtic fringes.

I guess, as an English taxpayer, I can stick with the North pro tem but there are large numbers of folks in Wales, Ulster and Scotland who blame the English for their woes, indeed often London and Southern England in particular. Such folk demand more not in a fraternal way based on solidarity but in a menacing way based on dislike. Watch a Question Tine in Wales and hear the rapturous applause when some low grade politician bleats about London and demands "a fair share" or more cash for Wales.

The graph below shows that when it comes to taxpayer handouts the Celts and Northerners get far more than their "fair share" but they will always want more until the English wake up and realise what a gravy train we have been funding and we get a vote on our independence, a decision which would make perfect sense.

But it will not happen and so the ungrateful and idle Welsh, Scots and Northerners will just carry on bleating in a post fact era manner.

PS In 1745 Bonnie Prince Charlie's Scottish invasion of England reached Derby. Might the SNP not be persuaded to take back their former lands in the North of England as part of a newly independent Scotland? 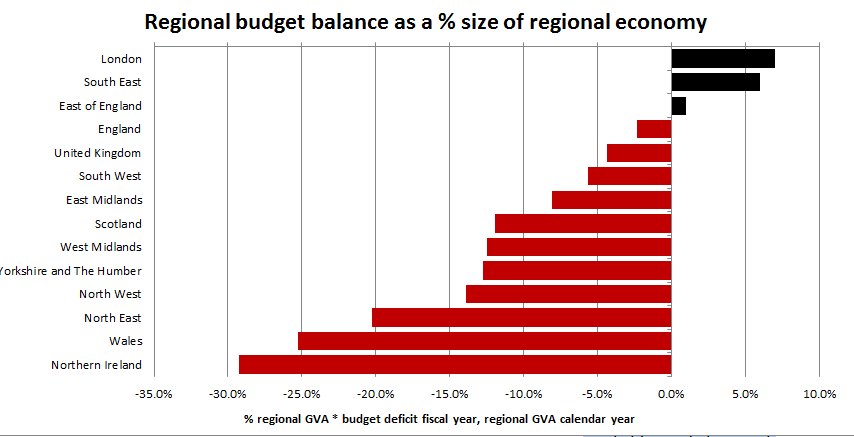