Photo Article: Maybe not see you in a Greek Court Bitchez - as Paddy says, 1% of Greeks are bastards

After quizzing George the architect, it appears that it is just one of my neighbours who is asking for 900 Euro compensation for chopping off branches on his olive trees to make way for the heavy machinery needed to renovate the Greek Hovel. In fact it is even better than that...

The olive trees are owned by a father and son. The young man reckons 500 to 600 Euros is about right. It is his father who wanted more - 1500 Euro. So they settled in the middle. It is the father who goes to show that, as ever, Paddy Leigh Fermor has the Greeks nailed. 99% of Greeks are the nicest, most fair and generous folks you can meet. My neighbour Charon wants no compensation and neither does the sister in law of lovely Eleni. But, as Paddy noted in his classic book The Mani, just now and again you meet a Greek who is just such a complete and utter bastard that he will serve as a reminder of how great everyone else is.

I have inspected the thirty trees which we have "pruned". In some cases the branches cut are the sort you would cut at harvest time to flail across a machine to clean off olives. They are that small and they will have regrown by the time of the 2019 harvest. So it is one year's harvest lost. In other cases the branches are bigger and it will take three years for them to re-grow.

George and I did our maths and we cannot see how the loss of income over three years is anything more than 400 Euro and that is generous. So I said I would pay 500 Euro and if the old bastard does not accept he can take me to court. Moreover I shall tell the entire village what a bastard he has been and shame him in public. It is his call and I am very relaxed either way.

Meanwhile at the hovel work continues apace. I cut frigana and the Greek Albanians work on the building and on killing snakes. As you can see the ugly concrete blocks beneath the old ugly windows have now gone as well and the one window into the bat room has been extended so that it will get more natural light. The upstairs room will be flooded with light as the windows will be be almost floor to the current ceiling. Of course when it is finished that room - which will lead into the new room above the rat room and the new wing, will have a pitched wooden roof so it should feel very spacious indeed. 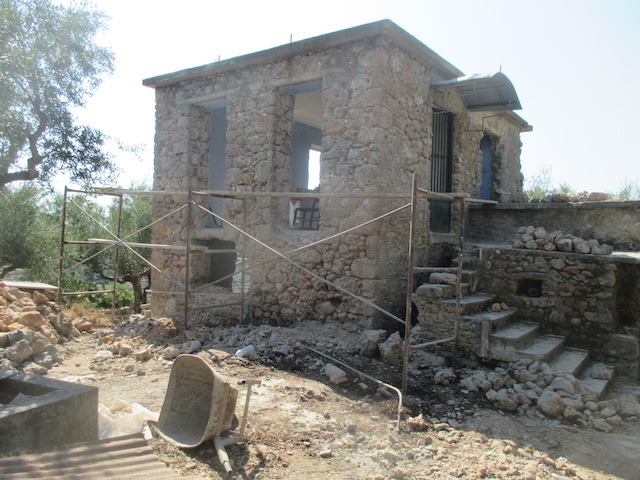