As you know, young Joshua, is obsessed with Thomas the Tank Engine and friends. The highlight of his year was meeting Thomas on the Watercress Line  with godfather Lucian Miers.  The Bard of the Boleyn gave him a plastic Percy which makes real noises and that goes everywhere. But for some reason his favourite train is bossy Gordon. He is also very fond of my Mother-in-law.

And so Joshua’s pride and joy is a metal two inch Gordon which comes with a separate tender. Everywhere we go out comes Gordon and Joshua runs him up a surface, my arm, a sofa, whatever saying “Gordon’s Hill”. Occasionally Gordon gets stuck at which point I say loudly, in a Gordon type voice “The Indignity!”

And so as I prepared to hand the Mrs and Joshua over to her brother-in law for a few days away from the building site over at his familial home 50 miles the other side of Kalamata, out came Gordon and the tender as we met up in the lobby of my usual hotel. Joshua played happily, we chatted and it was time to go. We packed up everything but where was the tender? Disaster!

As we go swimming in the sea in the bay of Kalamata Joshua looks over to the land on the other side in the far distance and says “The Mainland!”. That is because we are all on the isle of Sodor. And so, we lied and said that the tender was on the mainland and panicked about how we would replace it.

Yesterday afternoon as I returned to the hovel, the excitement of a day dealing with bureaucrats in Kalamata got to me and I fancied a lie down in the Bat Room. The Mrs will be impressed because before clambering on the bed I did actually take off my walking boots and, praise the lord, from beneath the flap above my ankle, what tumbled out….

The sense of relief as I phone the Mrs with the good news… Gordon’s tender really is on the mainland. 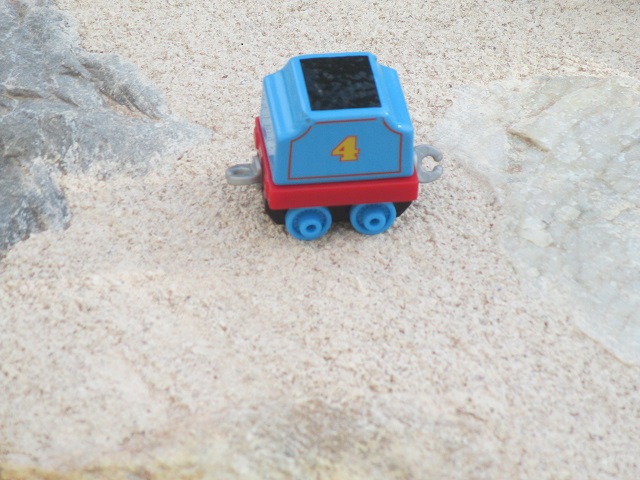