I despair for my profession of journalism - meet Ramsha Khan

I bring you the tweet below from Ms Ramsha Khan, which fills me with utter despair for the vocation of journalism.

As you can see, Ms Khan equates getting a degree in journalism from a marxist madrassa, aka a University in Airstrip One, with being a professional journalist.

My colleague Darren Atwater has no such degree but he knows that journalism is writing articles other folks don’t want publishing. That is the job of the 4th Estate. That is what once landed him in jail for a night. It is doing that which results in me and my wife being trolled on an industrial scale, me getting death threats, lawyers letters and worse. I’ve been writing as a job for 30 years now but I am, according to Ms Khan, not qualified to be a professional journalist.

Journalism is what my late Uncle Chris Booker did for 60 years. Unlike the folks who now run Private Eye who ARE the establishment, Chris, who co-founded Private Eye, always challenged the establishment. Even in his 70s, he found himself in Court with the threat of a stretch in jail for trying to expose something horrific, in that case social workers snatching kids from innocent parents. Chris had no degree in journalism.

In a time when a lame press stews in a GroupThink mire, unwilling or unable to hold the powerful to account, the last thing it wants is more graduates joining the “profession” who are already part of a media class unwilling to challenge the prevailing orthodoxy and thinking that a degree course makes them fully kitted out as “professional journalists.” 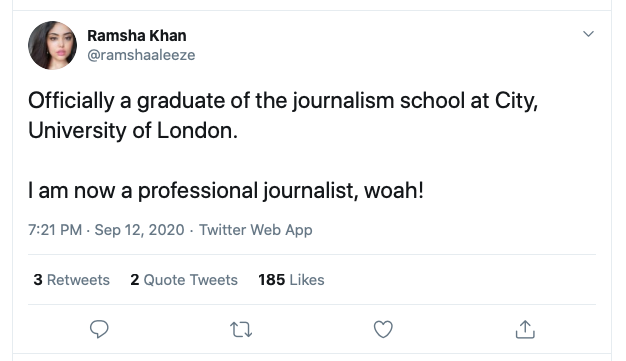