Photo article: Will I solve a 145 year old mystery this week? Who was Maude Winnifrith? DNA tests going out today!

Maude Winnifrith was born in 1875 and was my great grandmother. Her children included my grandfather, Sir John Winnifrith and the actress Anna Lee – once known as the British Bombshell. But who was Maude? The mystery has intrigued the family for decades and this week I hope to solve it once and for all with the assistance of a retired vicar in Oxfordshire, my father and two DNA tests.

Maude was illegitimate and her birth certificate was a forgery. That was established by my grandmother’s father Sir Arthur Cochrane, and led to a great rift between him and Maude. According to Anna Lee, the two exchanged only frosty glances at the wedding of my grandparents. We know that Maude was brought up by a couple called McFarlane in Bath and was the sole beneficiary of their decent but not enormous estate. However, well before she was able to pocket that dosh, she somehow found a very large sum to purchase the living of Ightham in Kent for her husband. How did she have so much cash?

Money comes to the fore again in 1935 when she made a mysterious trip to Dorset and came back with a suitcase stuffed full of bank notes which she said had come from an “old friend”. Who was that? Life is made harder by her opting to burn a stash of photos and letters but contemporaneous accounts say that the photos included ones of her as a little girl at Sherborne Castle, the home of the Wingfield Digby family. And she did claim on occasion to have lived there as a very young girl before heading off to the Mcfarlanes.

There are a lot more anecdotal clues including the christening mug of my grandfather which is marked AJ Winnifrith (Alfred John). But he was christened Alfred John Digby Winnifrith, his mother telling him that the addition of the D was her last minute decision. There are no other Digby’s in my family. Sir John and Anna Lee did a lot of work on this and there are various other clues which both identified.

Edith Wingfield Digby lived in Coleshill with her sister and father, the rector of the parish. Suddenly in 1874, the rector resigned with immediate effect and moved with his two daughters not to Sherborne but to Bournemouth. No good reason is cited for this. But I note that my great grandmother was born in 1875 and was actually called Edith Maude, although she termed herself Maude.  Edith Wingfield Digby never married but went on to set up a home for fallen women in Bournemouth. One can only guess as to why she had such an interest in the subject.  She died in, you have guessed it, 1935 in Dorset.

My grandfather and Anna Lee were both confident in their assumption of who their mother’s mother was but could not prove it.  This mystery has intrigued my family for years and today I despatched one of the kits to a retired vicar in Oxfordshire. My father will give his DNA sample tomorrow when I visit him. If Sir John and Anna Lee are correct, these two old men will be second cousins and we will know for sure in a few weeks. Or maybe the tests will show no linkage in which case the mystery will remain unsolved. 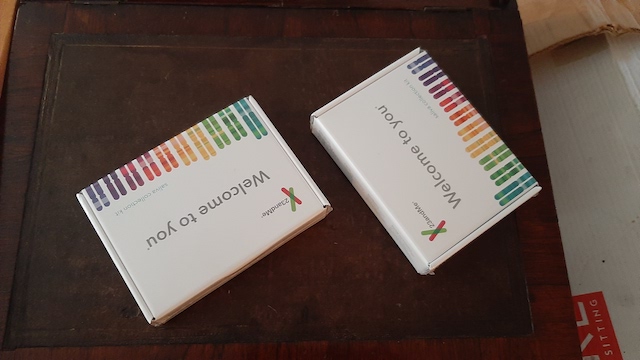