Photo Article: Tears from Mike the Vlach in Anelion

When I first came here, there was no road from Metsovo to Anelion; you walked down one side of the valley and up the other side. It was steep. Then, a few years later, there was a road winding along the mountains. There was nothing at the edge of it, just a drop. I told Joshua all about a taxi driver chasing rabbits with his car on this road, causing terror to my whole family. My sisters will be delighted to know that there are now barriers on the side of the road but I still took each turn very slowly. I drove so slowly that when I spotted a tortoise, I was able to pull up, stop and lift it to the side. That was, I think, a lucky omen.

Joshua and I pulled up on the edge of Anelion and walked to where I remembered Mike lived. His door was locked but as we turned to consider our next move, his younger wife, Alega, walked towards us. We instantly recognised each other and we were invited in for a cold coffee as Mike was still asleep. Alega’s son wandered down. He must be about ten years younger than I am and he was keen to talk in Greek. Alega is Greek, not a Vlach, and brought her kids up with Greek as a first language. Such is the death of the Vlach language. It made no odds in my quest, I understand neither language.

But I can still do 1-10 in Vlach, a trick I pulled on the couple running our hotel in Metsovo. That was met with surprise and, as their English is good, I explained all. Back in Metsovo, Mike’s son-in-law arrived, speaking English, and explained that he, Mike and Mike’s son had to leave at once to visit the Police to sort out summer access for the son’s son. His ex wife, a perfidious Albanian, was not playing ball. He suggested that ex-wives had horns and were mad. I used google translate to agree that, from personal experience, this could often be the case. That was bonding. We all agreed that Joshua and I would return later. So it was back to Metsovo, to exploring the town and enjoying another swim in the freezing hotel pool.

Five O’clock saw our return and more cold coffee with the son and son-in-law as Mike slept again and then he emerged. Google translate facilitated a conversation for my Greek and Vlach is non existent and Mike’s poor German has not improved and neither has mine. Like so many men of his generation, when Greece was truly impoverished, Mike had spent time with the Hun as a Gastarbeiter. I relayed a message from D, a babysitter to myself and my sisters and a student researcher with Dad who had enjoyed time in Anelion, sending her love and after a while memories of D but more memories of my Dad saw Mike get rather tearful.

His grandson had not taken the move to Anelion well and was screaming for his mother. Alega comforted him. I got Thomas the Tank Engine playing on my laptop and he and Joshua watched. That helped. Then the two boys, Alega her son and I went to a playground opposite. The crying stopped. Another Vlach boy who, aged 11, spoke great English, joined us and hugged the grandson. Soon it was smiles all round. Bread with chocolate spread followed for the two boys and, as they got nutella all over their hands and faces, the mood improved massively. It was more smiles all round. Angelic Joshua had played his part to perfection. Mike said “essen, Tom?”

My sisters will remember that food in Anelion was not always that great. But it had to be consumed to avoid giving offence. Sometimes we would hide a piece of meat in Dad’s jacket pocket rather than eat it. Dad understood why he must not think of his cleaning bills but just say nothing. The meat could be hidden in a crack in a stone wall at a later date. But I knew I must say “ne” and did so. A large plate of rice stuffed into a pepper and two tomatoes arrived, c/o Alega as in this house cooking is not a man’s job and I ate it all. Dad: I hope you are proud of me.

Again the kids went to play with other kids in the playground. After a while, I could see that Joshua was getting on fine bossing the English speaking kids around teaching them the game “cashpoint” whatever that is and so I talked to Mike again and we walked into the village to find his sister. She was out but we talked more. He said I was a good son for bringing him the news about Dad. That was touching. At least I think that is what he said in German/English. We passed several old old ladies in widow’s black and Mike would say words including pateras, Tom, Anglia and migalo.  My father the big man from England. They nodded, smiled and laughed. There were almost no foreigners visiting Anelion in the 1970s and 1980s. Just my father, a big man who spoke some Vlach and some Greek, ancient and modern mixed in a random way – but sometimes not as well as he thought – and drank inexhaustible supplies of cheap local wine with them and recorded them singing in their strange language on an old tape recorder.

And so fond farewells. Mike and I shook hands but then as men do here we kissed on both cheeks. The same with Alega. Joshua said he wanted to come again as he had enjoyed his playtime so much. The 11-year-old translated that to more smiles and he translated again when I said that I would come back with my wife and baby Jayarani – whose pictures I had shown to Mike – and with Olaf who had called as I had sat with Mike and had said hello and thank you in German.

And we drove off. The Mrs says she really does want to come up here but perhaps when Jayarani is a bit less of a crying baby. It is a trek to Anelion but one to make again and as Mike is now 78 and visibly a bit slower in gait, perhaps one to make reasonably soon.

The photos below start at the Old Church where everyone went every Sunday. On the lower floor, I would sit and stand with my father and the other men. Upstairs were my sisters with the other women. I am not sure if it is the same progressive approach today. The two views are from the church. The first is of Metsovo on the other side of the valley, the second of this side as the mountains continue forever.

Then Alega, Mike and Joshua. On one trip here in the 1970s we walked over to Metsovo with our cases to catch the bus to leave. We arrived with half an hour to spare and my little sister N, who cannot have been more than seven or eight, could not find her panda to which she was devoted. Kukla was back in Anelion. The man below, Mike, ran from Metsovo to Anelion, found Kukla and ran back. In the stifling heat, he ran up and down those mountainsides like some Greek hero of old. As the bus pulled out of the station, Dad opened a window and an exhausted Mike threw Kukla through it so stopping the floods of tears from N. That was forty something years ago.  But Mike remembers Kukla in a way that everyone in our family does. 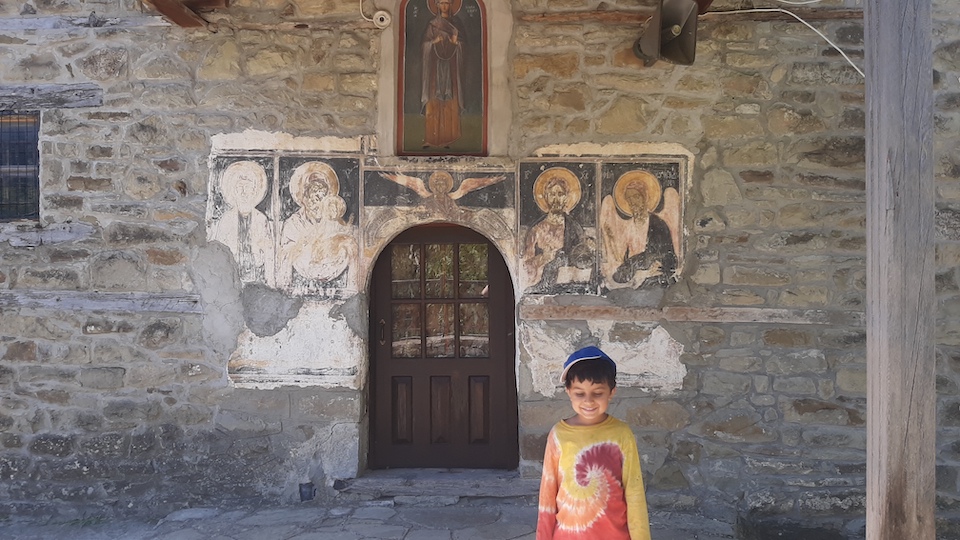 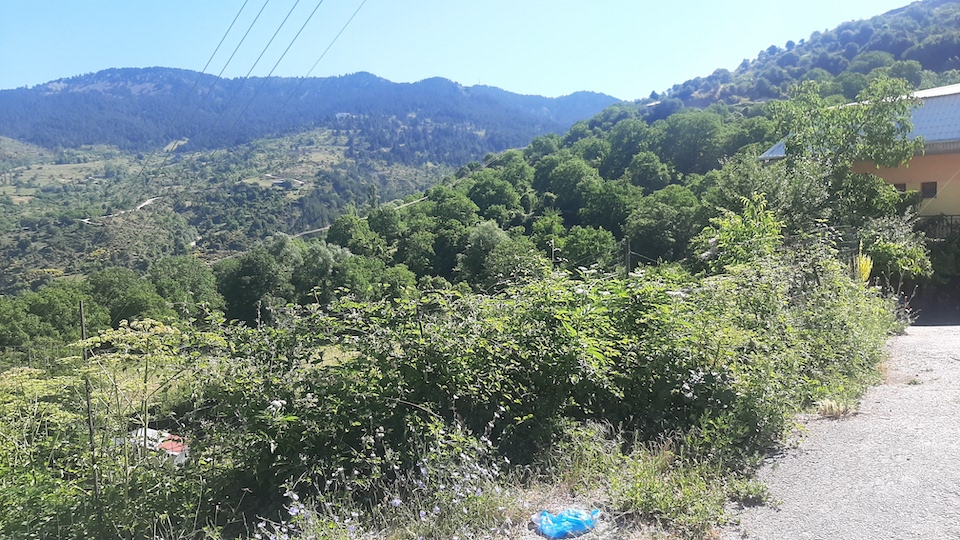 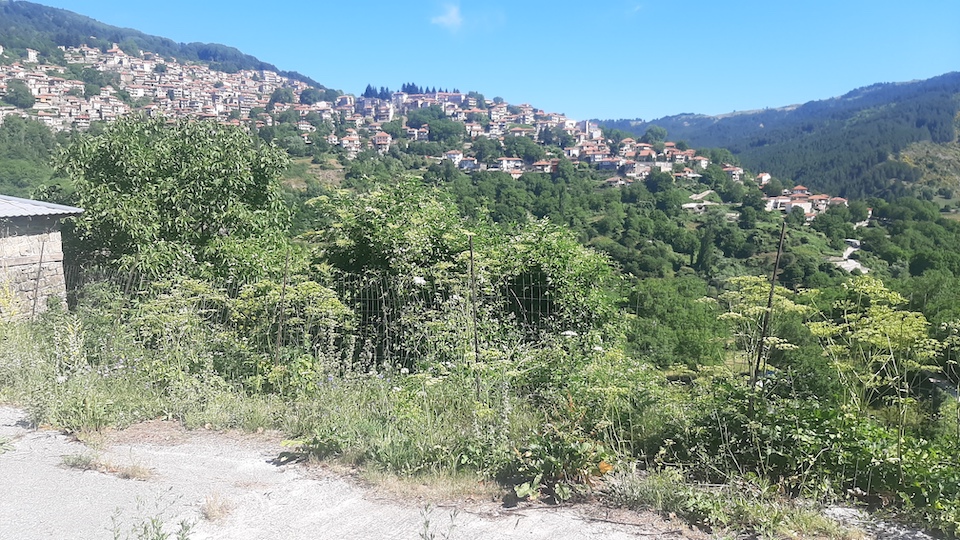 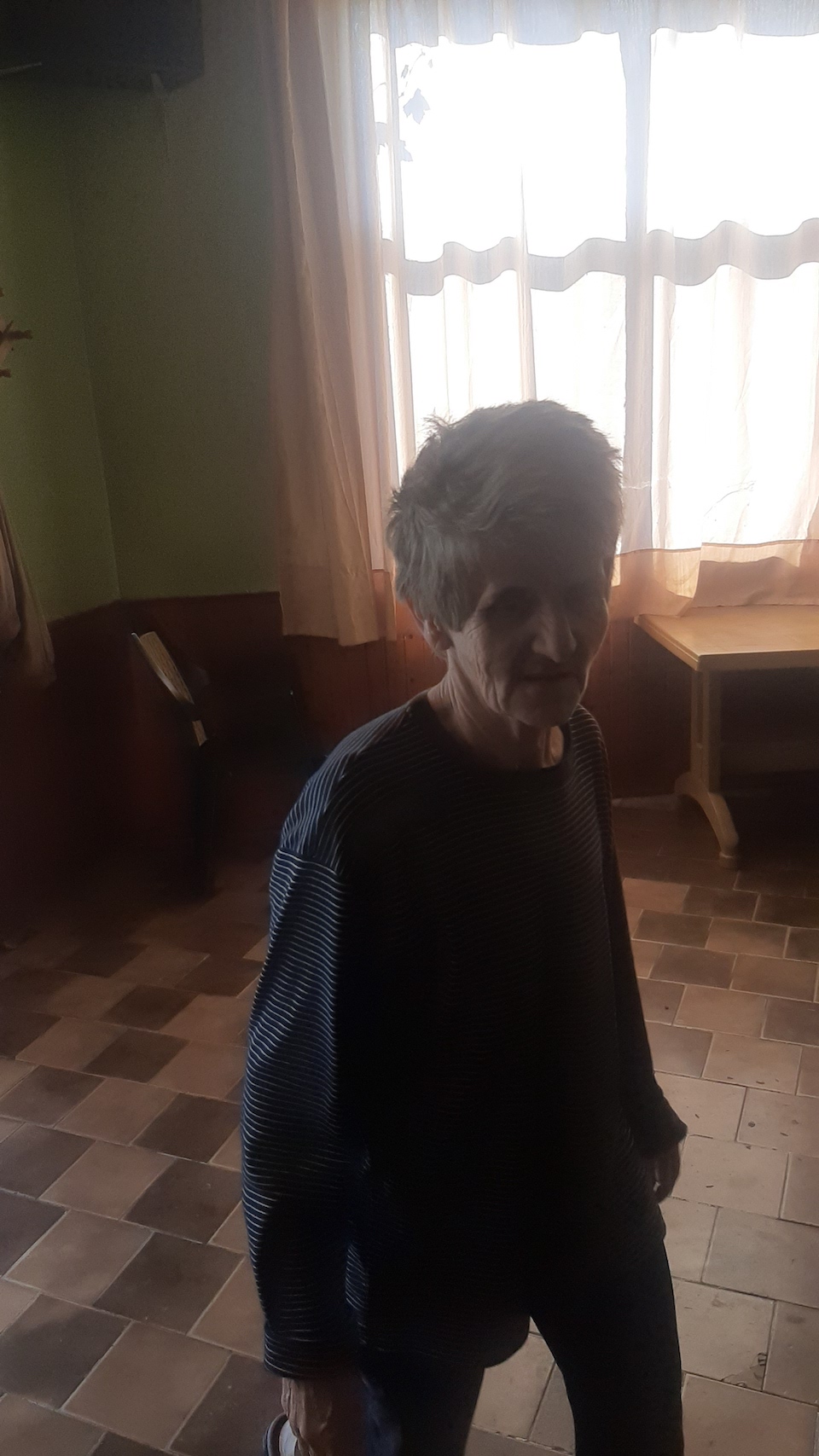 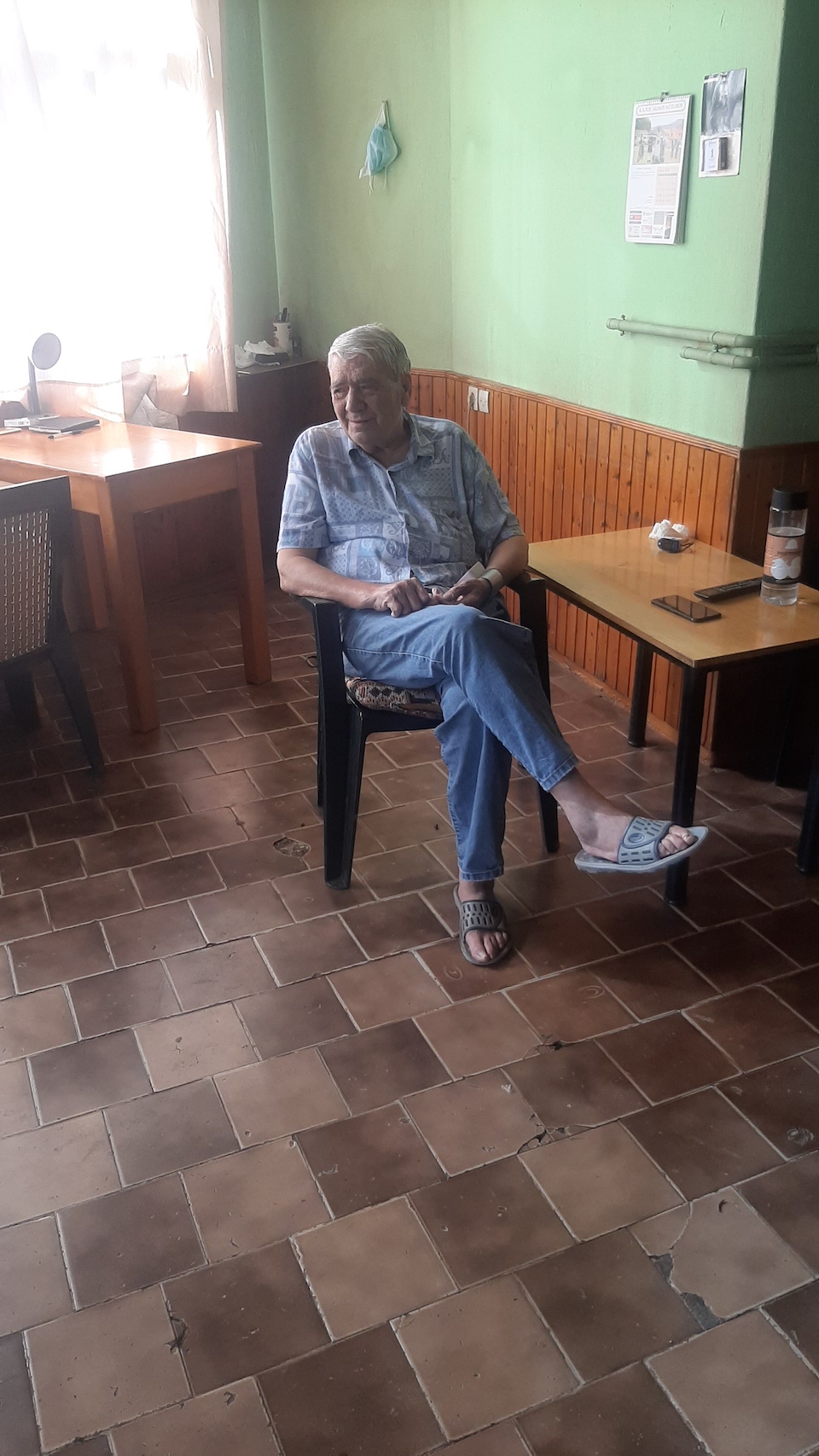 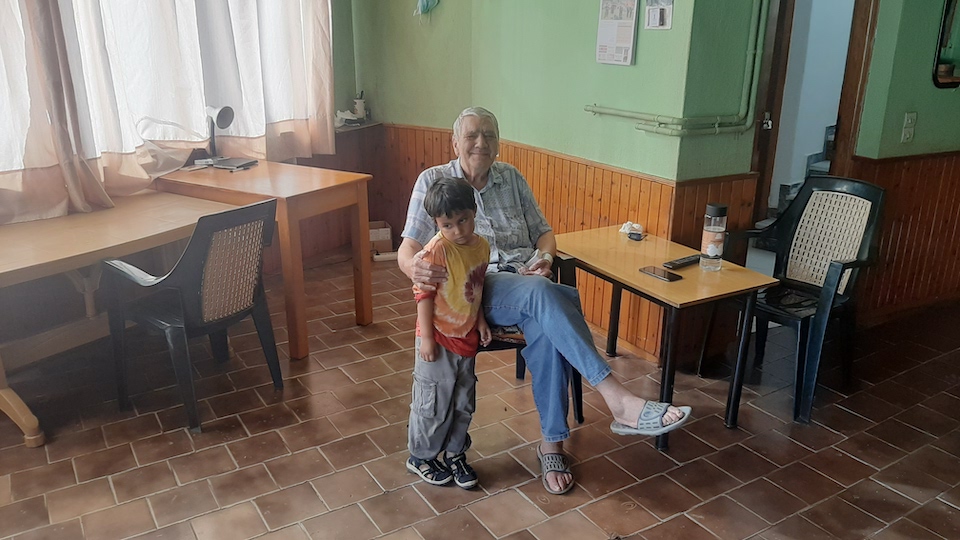