As we enter 2022, here in Airstrip One, The Ministry of Truth and its big corporate media allies such as LinkedIn will not, as I discovered to my cost the other day, allow anyone to challenge the GroupThink narrative on the scamdemic. And thus we must all don our face masks and bang our pans to celebrate the Knighthoods for Chris Whitty, Jonathan Van Tam, Jenny Harries et al.  Do not, whatever you do, mention the S word: Sweden.

Sweden was the only country not to follow the lockdown GroupThink.  Publiications such as the FT warned that its policy would lead to indusrial scale deaths. Those of us who suggested that it would not were tarred as extremists. But the data is now in on excess deaths by country during the past two years. Guess what?

If the FT, BBC and other members of the GroupThink doom mongers were correct, Sweden would be top of the charts by a mile with bodies collected for mass graves by the death carts of Malmo and Stockholm.  But not only is  Sweden not top by a mile it is in fact bottom by a mile.  The policies pushed by Whitty, Harries, Hancock, Johnson, Starmer and the entire political and media class across all of Europe, bar Sweden, appear not to work.  Take away those knighthoods before youdiscredit the hoonours system completely. No sniggering at the back please. For this sort of relative outcome folks like Whitty should surely be facing a judicial review or worse. 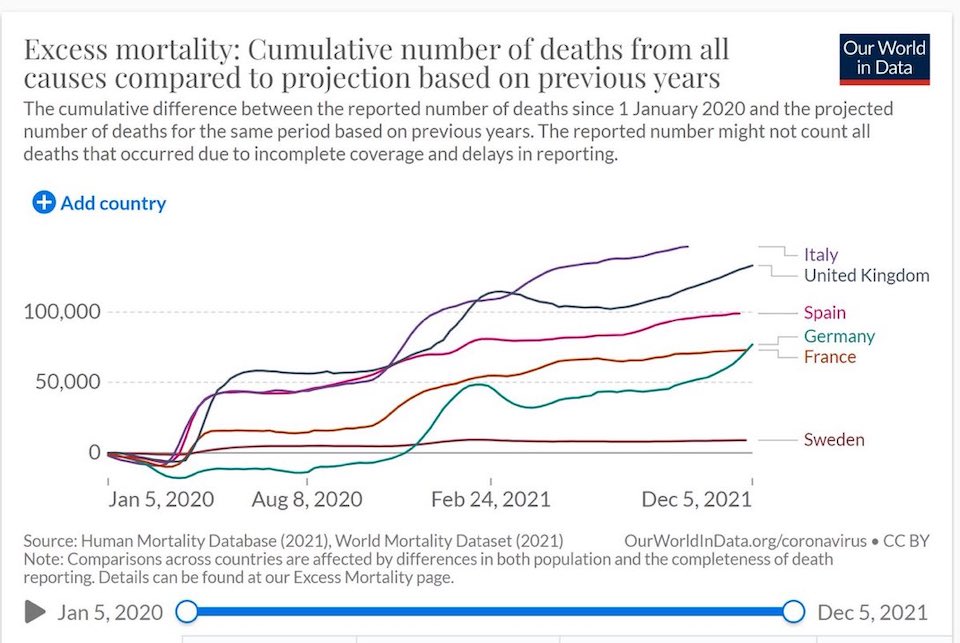