Zak Mir and Richard Jennings – who is the Real Man? Neither.

An enjoyable evening at Real Man Pizza Company finally drew to an end. Zak picked up the tab. I hope he submits it as an RSH expense claim.

I suppose after my last 5 AM bender with Zak I should feel lucky to escape at 10.30 PM. We were joined by Richard Jennings of SpreadBet Magazine – he is the one on the right. 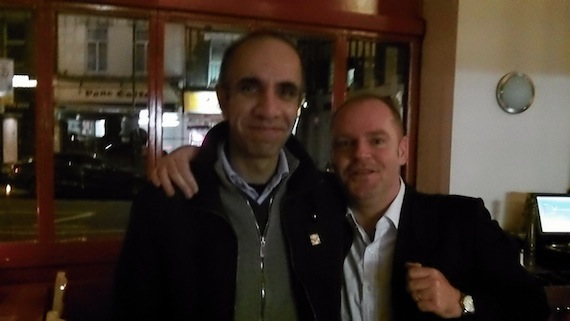 The two Northerners (some GNSH & Glasgow respectively) engaged in an act of macho bravado with an order of the Snaefell Diabola, the hottest pizza in the UK. Jennings was demanding water within seconds and wimped out after less than half a pizza. Zak claimed that as an Asian he was used to hot food. He managed one slice.

Perhaps you are more of a macho man than Zak Mir. Feel free to pop along and out it to the test.

My old father has been bed bound in a downstairs room for m any months now. In these days of Coronavirus he can only speak to his children, step children and gerandchildren on the phone. His only human contact is with a team of masked carers who give him food and drink and do an amazing job of keeping him cheerful. And thus his 82nd birthday this weekend cannot have been his best. However…

The sheer nastiness of some folk - Boris Johnson goes to hospital