What do you cook for a nutty Vegetarian such as Malcolm Stacey? 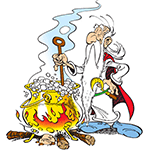 I have invited Getafix Stacey and his charming wife over for lunch. But have received three stern warnings from the druid.

First up he lives in remote West Wales, drinking at the Punter’s Return, seeking out the Money Tree and looking after “my precious” – his stash of Advanced Oncotherapy share certificates. Malcolm says that he and his Mrs sometimes go to Cardiff but he cannot bare to be away from his precious for too long so rarely heads further east. But he promises that he will make the trek over to Bristol soon.

Second I am warned that Malcolm’s Mrs is even more of a mad lefty than he is. I am used to a Mrs who is a mad lefty and that does not phase me. Maybe Getafix and I can leave the two of them discussing the evils of capitalism and head off to the Conservative Club for a few drinks.

Finally I am warned that neither Getafix nor Mrs Getafix eat meat. Or fish. Now that is a toughie. Veggie food can be terribly dull. I am thinking of a potato, olive and goats cheese pie (please tell me they eat cheese) with peperonata (a stew of peppers, tomatoes, garlic and a bit of chilli – Darina Allen recipe) on the side.  Followed by apple crumble and a cheese selection? Can anyone think of anything more exciting?