Buzzfeed likes publishing fake news about Donald Trump and others. It ignores basic journalistic ethics on fact checking but when its pea brained columnists get to twitter they just make things up. Meet Leticia Miranda, Consumer Affairs Reporter who asks on twitter "Is this offensive?"

Of course for Millennial snowflake bimbos who cannot do their homework most things are offensive. The implication here, one assumes, is that Nazi regalia is offensive. Whatever. But the symbol depicted is an Iron Cross on a first world war plane, probably belonging to the Red Baron.

So is an symbol which is 200 years old pained on an aircraft that predates the Nazis by more than fifteen years offensive? I would suggest that unless you cannot be bothered to do one historic fact check it is not. But then Buzzfeed does not go in for fact checks, just fake news. 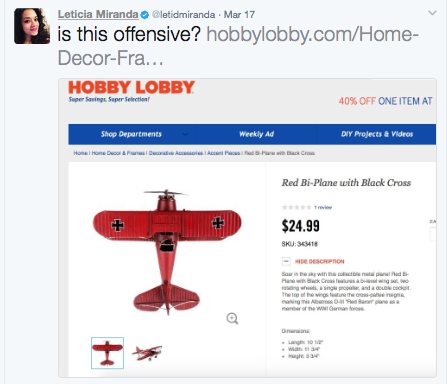