As he had promised my friend Nicho the Communist returned to the Kourounis taverna after half an hour and so shortly before eleven, two hours after we planned, we were ready to start poisoning the frigana, the ghastly snake hiding thorn bushes, that blight the Greek Hovel. Shall we go in my car I asked?

I must take The Albanian, said Nicho. Great he has hired an Albanian. I felt much happier. No offence but Nicho is getting on a bit and when it comes to hard work here in Greece you can't beat an Albanian. Moreover, since my status has been elevated to that of snake killer, I have sensed a diminution of the previous bravado of my friend when it comes to serpents. I rather feared that if we encountered one he would join me in flight. Say what you like about the Albanians but they are as hard as nails. They will kill snakes with their bare hands.

And thus I set off in my car, Nicho followed behind in a battered truck with the young Albanian, who greeted me like an old friend "Hello Thomas", sitting beside him. That, it turned out, was the full extent of his English but in Nicho we had an able translater. He is the best English speaker in Kambos, not that there is much competition for that title. For what it is worth I like it that way. Coastal villages might lose their character. Kambos stays resolutely Greek.

When I go poisoning by myself I use a 5 litre bottle which is jolly heavy. But what i was about to witness was industrial scale poisoning. It was genocide. No other word is appropriate for the slaughter which was set to unfold. Nicho drove his truck past the hovel, past the ruin where a snake lives to the far end of the fields. I have never seen that done before and as he squeezed past rocks and over stones the truck became that bit more battered. 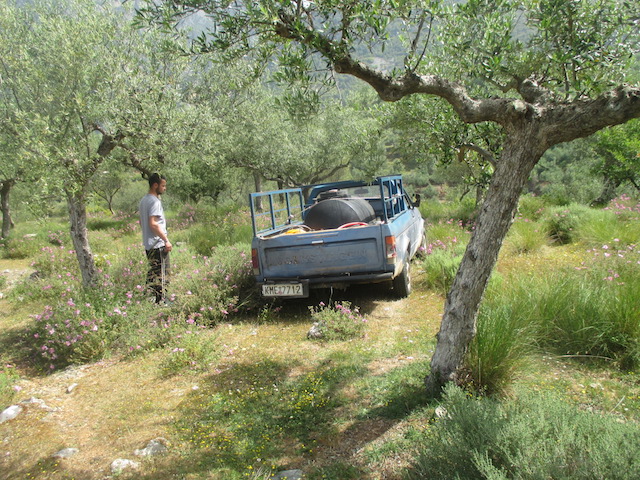 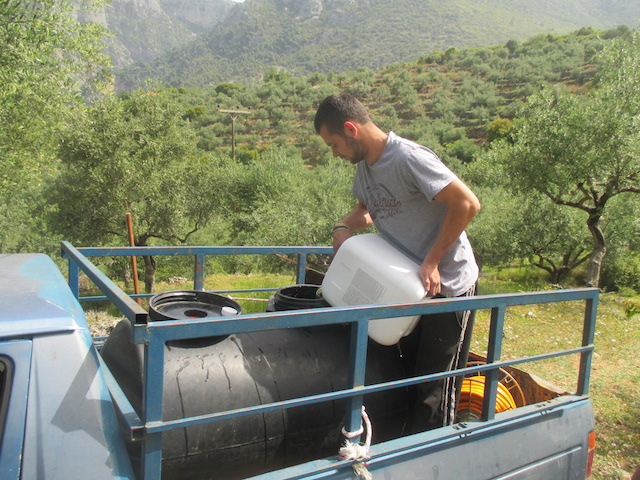 As you can see the truck contained a cylinder into which we added 20 litres of poison to the 380 litres of water it contained. I saw we, of course I mean Nicho and the Albanian. The Albanian started a motor and a long hose was unwound and Nicho started spraying. It was not just the frigana but all sorts of bushes and flowers. Everything in fact. The poison does not harm olives trees and of course the trees were spared but everything else got the treatment. 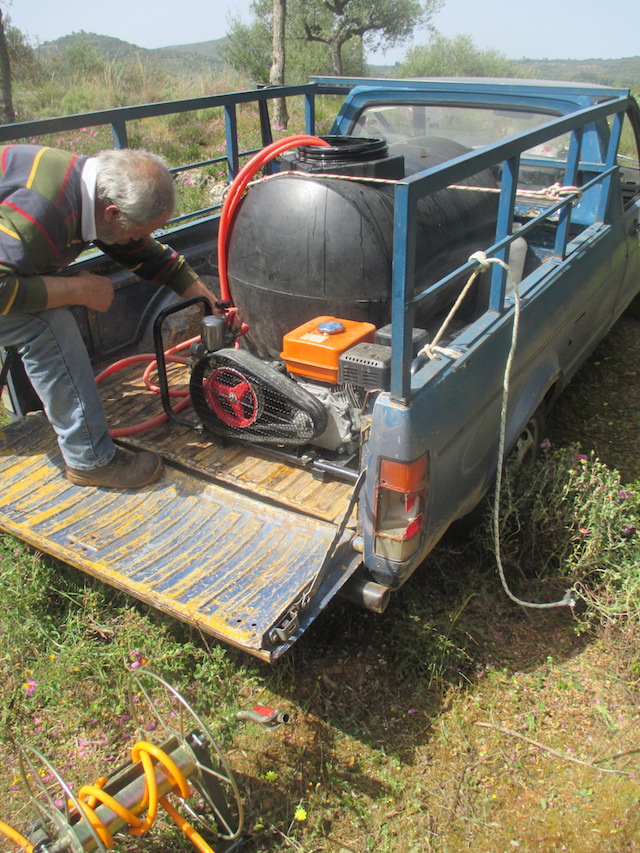 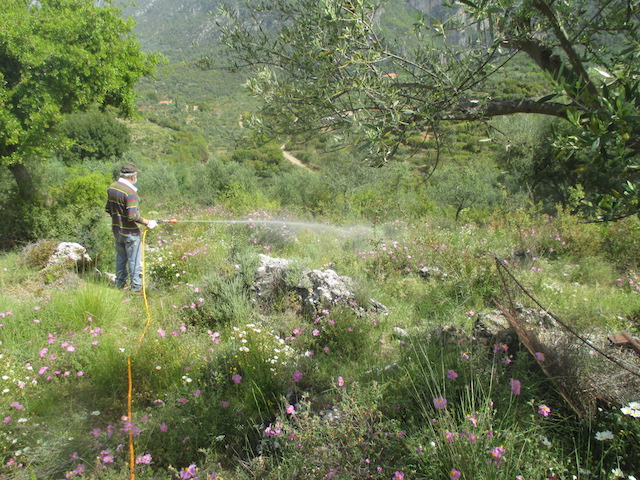 After a while Nicho handed the hose to the Albanian. "I am old" he said. "The Albanian is young and faster." I thought both were frighteningly efficient. My role was limited to helping pick up the hose when it snagged on a rock or a plant but three hours traipsing around the hovel was enough to leave me feeling pretty drained. I thought about trying to explain about diabetes and blood sugars and the dangers of them falling too low but thought that this might be lost in translation and just be seen as a sign of being pathetic. So i soldiered on but celebrated greatly when the 400 litre tank ran out.

We start again tomorrow at 9 AM. The job is 80% done. Nicho assures me that the snakes hate the smell of poison and will flee. And also that within ten days everything sprayed will be dead. We will have another session to finish off anything we missed in a couple of weeks but the land will then be clear and so we can mark out cleared spots for planting new trees in October. And the snakes can bugger off to plague my neighbours. What's not to like?

I handed the Albanian some Euros but Nicho refused to take payment. I mentioned bottles of whiskey and that seemed to meet with his approval.