I always carry my camera with me as I wander round the Greek Hovel. This is because of the snakes. If I meet one my first instinct is to flee. My second instinct is also to flee. Just conceivably, if I am carrying a pick axe I might go on the offense. But I have nightmares about snakes and, on balance, I know that I am told that they are more afraid of me than I am of them but I think that is bollocks. Though an official snake killer these days I am still shit scared. And I also recognise that I might just tread on one by accident. Hence the camera.

I walk with heavy step and I tread carefully so I hope that I will never tread on a serpent but one day I shall be unlucky and may therefore be bitten. At which point I shall whip out my camera and take a photo of the little bastard knowing that I have ten hours to seek medical attention. I will thus be able to show the quack what it was that bit me and ensure I get the right anti venom. With luck it will be a non poisonous snake – 18 of the 27 varieties of Greek snakes are non poisonous – and the Shipman will just tell me not to be such a wuss and to piss off. But all bases will be covered.

Having that camera also allows me to snap away at the other wildlife diversity. Yesterday I came across the stump of the tree which used to stand behind the, now demolished, old ruin whose stones are being cannibalised to extend the hovel. What glorious colours were on show. I hope the camera captures the beauty of nature.. Is not God a jolly clever chap? . 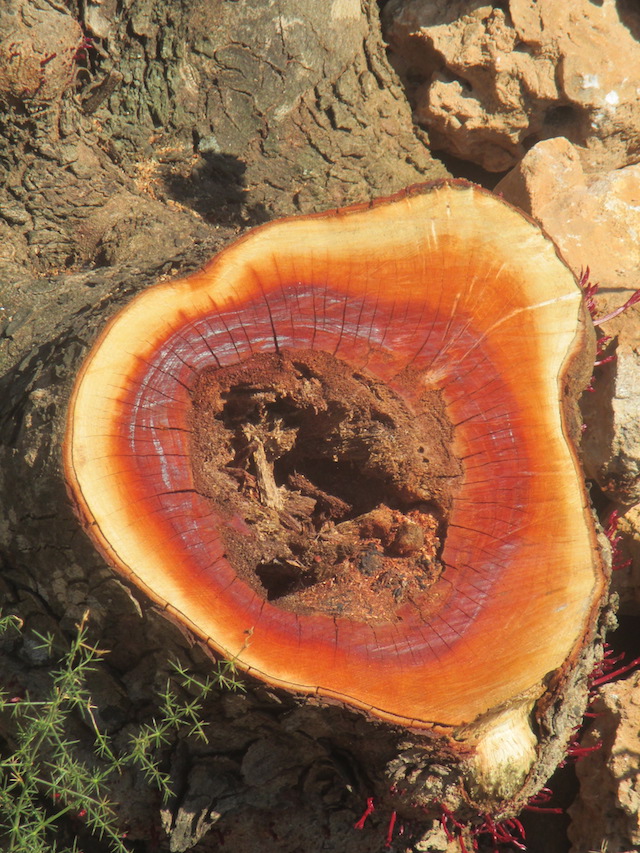