As the Left Embraces Jew hating, idiotic Anne Frank Center does its best to piss off its remaining friends

Mark Steyn wrote a funny piece a few years ago about why it would soon be hard to perform a play about Anne Frank in her native Holland. Steyn reasoned that as the German troops marched on stage looking for the little Jewish girl who was hiding in the attic, the audience would start shouting out "she's hiding in the attic, she's up there."

Across Europe anti semitism is on the march and all too often it is the liberal left, so befuddled by its hatred of Isreal, that are the fellow passengers. Hence the support from leading members of the British Labour party for the vile events of the Al Quds day march. So how do liberal Jews react? By insulting and abusing their remaining supporters, who are largely of the right. Whatever.. I bring you a tweet from the Anne Frank Center below. I should note, hat tip Reg, this is not the Anne Frank House organisation in Europe but a US grouping which says it wants to push for what Anne wanted.

What this tweet has to do with remembering poor Anne Frank and ensuring there is not another holocaust is beyond me. This is a liberal virtue signaller putting words into the mouth of a long dead girl to make the point that President Donald Trump is, in terms of who he has waged war on, the new Hitler.  All the minorities below could have ended up in Auschwitz alongside the Jews.

Of course Trump has not waged a vicious war on any of the minorities below. That is just a lie. As for war with North Korea, if it launches a nuke on LA just how should a virtue signaller respond.

The tweet is ludicrous. And it insults not just POTUS but the millions of conservatives across the West who supported him, folks like myself. And folks like me usually stand pretty strongly with Israel and against the holocaust deniers and Jew haters. I certainly do as those who have read my work for many years will know. Pissing on your core supporters in this way really is not very smart is it? It is not going to make me start rooting for Hamas but when I am looking for a Holocaust memorial charity to support or donate to, I am afraid that it will not be this one. 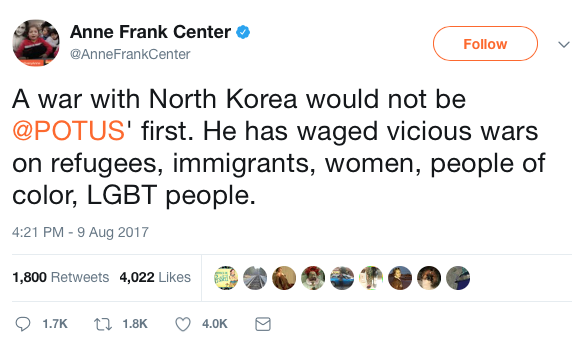