UK Oil & Gas - as it prepares for placing more ramptastic news from Horse Hill: DO THE MATH MORONS! 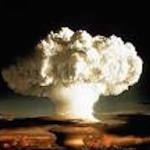 Remember Horse Hill? That was the original breakthrough site for UK Oil & Gas (UKOG). It was the Gatwick Gusher. It was the site that lyin' Steve Sanderson claimed contained a billion barrels of oil. Then he said he never claimed that. Then a video emerged of him saying that. So is that one big lie or two? Anyhow as UK Oil & Gas tries to ramp its shares ahead of a placing we have more ramptastic news from the Hill.

It was very late, nearly eleven at night, and very dark but a large mammal was moving off the  badly lit road ahead of me to my right and off into the fields. I was two or three miles outside Whitchurch in Shropshire, heading back to the Welsh Hovel and I swear that the animal was bouncing along like a Kangaroo or Wallaby. I am convinced that it was the latter.