West Ham virtue signalling for the Irons - I don't give a damn, I just want them to win tonight

My beloved West Ham are on nine points and in the relegation zone. We have just sacked one useless manager in Slaven Bilic, something we should have done ageas ago. But we have replaced him with David Moyes and many of us fear that he will make Bilic look like Ron Greenwood. So facing the biggest crisis since the last one I am deliughted to hear the big news today...

The players will be wearing rainbow laces tonight to show the club's solidarity with the LGBT community, let'sd kick homophobia out of football, yadda, yadda, yadda.

I marched against clause 28, I have written on the need for greater tolerance and support for the LGBT community for years. I need no lectures from a bunch of players most of whom can't count to 28 let alone knowing what clause 28 was, about LGBT awareness. This is utterly pointless virtue signalling.

Like almost every other person who calls themself an iron while fiully aware of what an iron hoof refers to in cockney rhyming slang ( iron hoof, poof, geddit?), all I care about is getting three points at home tonight against Leicester City. I really don't want lectures from the club about how or what to think I just want them to start playing even half decent football. Is that too much to ask? 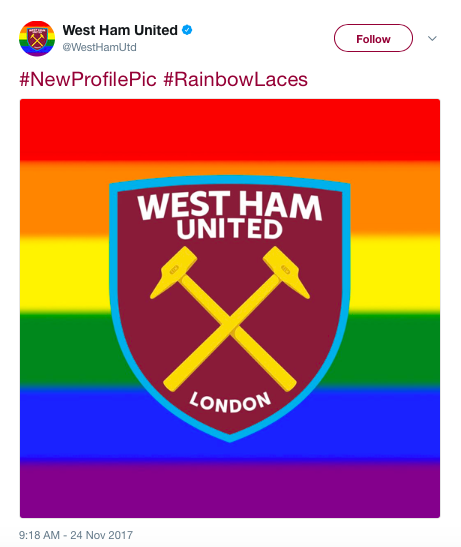