Photo Article: olive harvest at the Greek Hovel day 3: Nicho the Communist says I am mad

My best friend in Kambos said it in the nicest possible way and I should admit that i am beginning to doubt my own sanity. After day three of my harvest i now have just over half a 50kg sack of olives. As i wandered into the Kourounis taverna in Kambos, Nicho had asked how I was and i replied that i was a bit tired after harvesting. He said "you are working with the Albanians?"

I replied no. I am doing it alone. There are too few olives to make it worthwhile hiring Albanians. His verdict on me is, I think, fair. At the start of this adventure, as George the Albanian lent me four sacks to fill, I thought "I will show him, I will fill six!". By yesterday I had scaled that back to four. Now my goal is to get to two which will give me 15 litres of oil to take home. But as i try to fill those bags I am starting to question my own sanity as this is back breaking work.

Many of the trees have no or very few olives as a result of the storm. Those which still bear fruit do not have enough to justify moving the mat and beating the olives down with my paddle and so I have a new strategy. The mat stays stationary. Instead I use my trusty hacksaw to chop off any branches with a half decent amount of olives. George the Albanian uses an electric saw for this but I am reliant on the old ways. I then drag the branches to the mat to give them a damn good thrashing. That can be quite therapeutic.  The piles of branches are, as you can see, getting bigger.

By the time I finished today it was starting to get dark, it was getting colder and my limbs were starting to ache. As i kneeled to scoop my weedy pile of olives from my mat into the sack I felt just a little pathetic. This is not how a harvest is meant to be. A sane man would call it a day and buy some oil from his neighbours to take home. But as CJ from the Fall and Rise of Reginald Perrin would have said" I did not get where I am today by being sane." 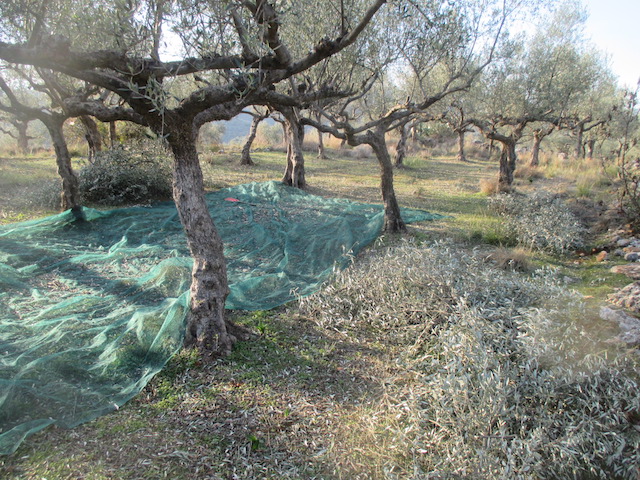