That Hollywood had a major problem with sexual harassment is beyond doubt. That it is starting to clean up its own Augean stable is undoubtedly a very good thing. One hopes that folks like Harvey Weinstein and Kevin Spacey get their just desserts but also that those who were already rich and secure but who put their own careers before principle and said nothing so putting more vulnerable folks at risk are rightly pilloried. I refer to women such as Meryl Streep and Oprah Winfrey.

But of course that is not happening. There is no lambasting of the enablers. In the same way that Hillary Clinton has not been taken to task for her enabling of her husband the serial harasser and rapist Bill, the grand dames of the Hollywood elite are having their sins airbrushed from history.

And so last night at the Golden Globes the A-listers all wore expensive black dresses to make a statement. And then lectured us all about how we too must change our worlds. So what if those like Oprah enabled the crimes of the past with their silence. So what if the Hollywood scandals were so much more degenerate and widespread than than what happened in the real world? Once again millionaire celebs took time out from their sheltered and privileged existences to play the victim and then tell the rest of us hiow we need to change what we do, as if an ability to act somehow makes to so much smarter and aware than the rest of us.

Connie Britton, star of the fantastic Tennessee based country drama Nashville, made the point perfectly with this T-shirt. For Connie and her liberal pals that may be a witty comment and the $380 price tag for this item of clothing a nothing. Back in Tennessee the average resident would take 4 days to generate $380 in after tax pay. But thanks for the lecture Connie, Oprah et al we know where you are coming from. 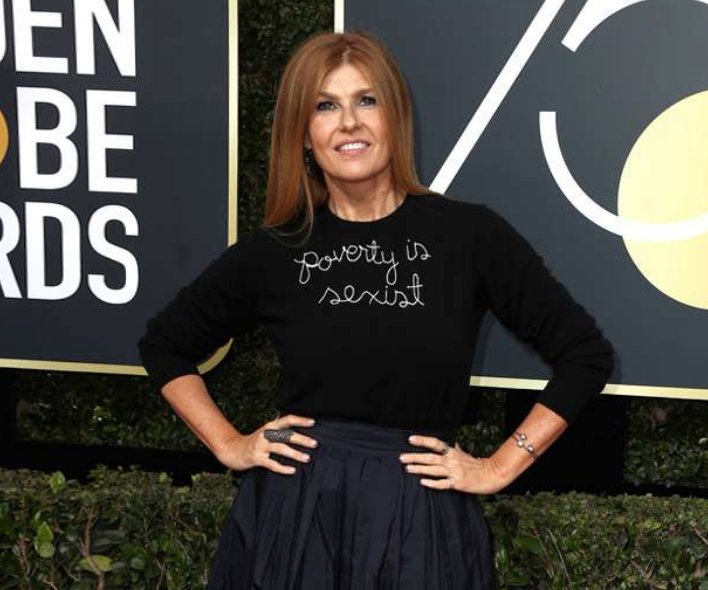