Photo article: Bloody Bricks and an all parties meeting at the Greek Hovel

Once before I arrived at the Greek Hovel to find workmen proudly admiring a construction made of brand new shiny bricks. Much to their pleasure I had it torn down, an extra days work for them. I rather assumed that the message had got through. You can imagine my horror when arriving at the hovel yesterday to find piles of shiny new bricks in the new wing and the rat room. Cripes!

George the Architect is not around, for family reasons, but his business partner Sofia and a young trainee who acts as translator soon arrived and a heated discussion with a gaggle of workmen ensued. It is the way of the Greek language that a discussion on the most trivial matters becomes so animated that it appears as if all parties are trying to solve some major international crisis. I stood my ground.

In the rat room, the walls are the old ones and are, frankly, not that beautiful. So they will be plastered with a smooth white finish. As such I showed that I can compromise and accepted that in that room, a narrow room, bricks can be used to house the eco-loo and then plastered. They will fit in.

But in the new wing the stonework is magnificent. A brick and plaster enclosure for the eco-loo and shower would simply be wrong. One of the workmen who spoke reasonable English agreed with me and it was agreed that stones would be used. There was a rear-guard action in some quarters. Do I not realise that this will make the bathroom that bit narrower as the walls will be thicker. We worked out the maths and it was agreed that my net loss would be 24 centimetres. I do not see that as a problem.  Eventually folks conceded.

Sofia, the trainee and I wandered around the house ironing out numerous other little points as we waited for the doors and windows man to arrive. He, I gather, is also the man who will build the floors/ceilings in the new wing and above the rat room. Eventually a rather large and unshaven chain smoking individual toddled up.  Now for the bad news.

The roof, which was meant to have gone on three weeks ago will start to be erected early next week and will be finished by the end of July. But the windows, doors and floors? Er.. September said the man. What the fuck? I was wielding my olive pruning axe and started waving it angrily, as would a Greek, to show that I was cross. I had made it quite clear to George that in late August the Mrs, Joshua and Olaf arrive for a holiday and that while I had no problem with a lack of windows and doors the women of the household would do.  The man said he would do his best and started measuring up the windows and doors. FFS why did he not do this weeks ago?

It has been agreed that at least some windows and doors will be installed by the time the Mrs arrives with an aim of getting everything done. Pro tem, at least the bat room has a door, a window, a shower and an eco-loo. It might be cramped but we could all stay in that one room but surely we could at least get the rat room made wildlife diversity proof? Amid talk of how ferocious Olaf can be (what do they know about my charming daughter?) it has been agreed that they will work all hours to hit our targets.

I needed to calm down as the all parties meetings continued, without the windows man who was measuring away. So though in shorts and sneakers, not the jeans and sturdy boots one should wear in the snake fields, I headed off to prune my beloved olive trees.  Now and then I was called back to settle another minor point. In the end I gave up as pruning, especially when you are being extra careful as to where you tread, requires concentration and some semblance of tranquility.

Notwithstanding my concerns about snakes and other members of the wildlife diversity community I cannot stress how much I feel at home working in the fields. I accept that I am perhaps not the most efficient of workers and it is also very possible that I may not be the greatest of olive tree pruners or harvesters but as I work, amid the almost deafening but soothing  noise of cicadas, there is a real sense being at peace. One can forget about work back home, indeed it helps you to realise that it really is not that important or, at many levels, enjoyable. The frustrations I feel almost every day as I stare at my computer just disappear.

The view, BTW, is of the new wing ground floor looking away from the mountains. 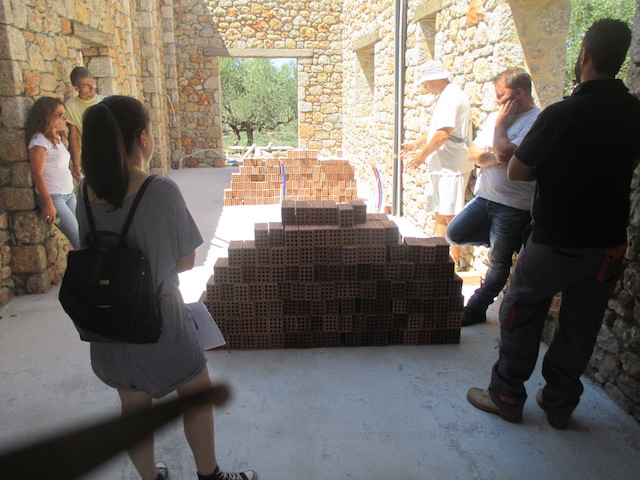