Photo report from the Olive harvest at the Greek Hovel Day 3: the Albanian cavalry arrive

I rather regretted that third jug of local rose the night before, when my alarm started ringing at 5.20 AM. For Thrasher Bell had to get back to London and that meant getting him to the bust station in Kalamata before 6.30. Feeling a bit groggy I drove him into town and dropped him off. Stopping off at an ATM on the way back to load up with cash to pay my Albanian troops I arrived back in Kambos in time for an early morning coffee at the Kourounis taverna owned by lovely Eleni. The news was bad...

George the Albanian's brother had been hospitalised late last week so he was running half a day behind schedule. I headed back to the hovel with a hot cheese pie for Bernard and as I walked to my car who should I meet but George being driven by his son, an English speaker. I was assured that five Albanians would arrive by one.  My next encounter was with the local golden eagle sitting on a fence as I drove down the back track towards the valley floor.

ShareProphets reader Bernard and I laboured manfully all morning. And at two o'clock the Albanians pitched up. As you can see below, they know what they are doing. But we only enjoyed two and a half hours of their work before the dark descended.

My worry is that George reckons he will be done in a day arguing some trees are empty. He has another job to go to. I know that and having walked my land with Bernard I know that there are an awful lot of good trees. That will be a battle for day four. Can we get an extra half day out of the Albanians? So far we have c470kg of olives either down at the press weighed and waiting for pressing or up here bagged at the hovel.

I discussed this with Eleni after supper. This is Greekenomics for you. There is mass youth unemployment in Greece. But as this country;s economy has tanked some Albanians have gone home or to go work in a car wash in Britain. So there is a shortage of Albanians.  Thus Eleni has no-one to crop her olives. Everyone is fighting for Albanians meanwhile hundreds of thousands of Greeks sit there not working paid welfare by a country that is bankrupt. Go figure. 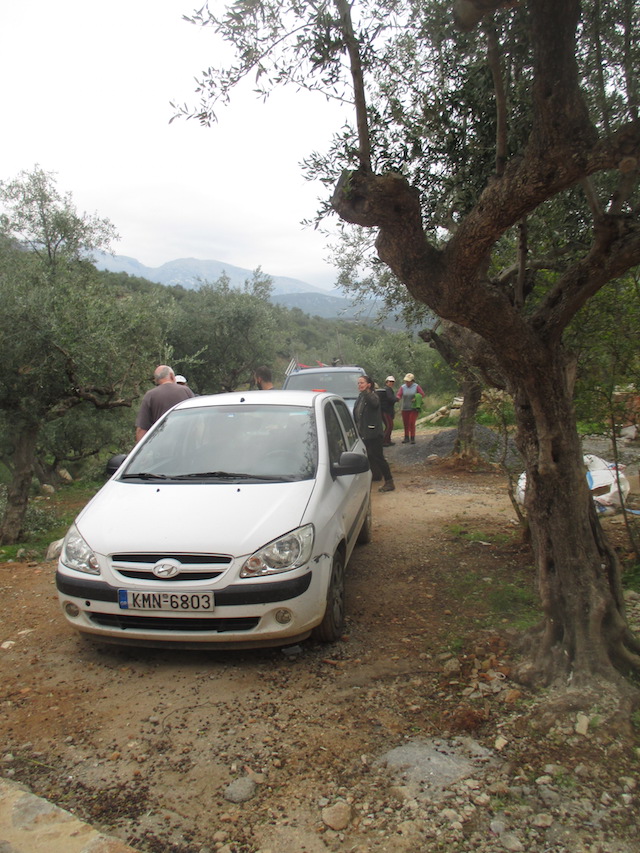