Volunteer harvester K texted me on Tuesday night to say he was on the 7.30 express bus out of Athens and so at around 10.30 I pitched up at Kalamata bus station and asked the ticket officer how long until the Athens bus arrived? 5 minutes he said.

After 5 minutes a bus duly arrived. Gosh these Greeks could teach Mussolini a few tricks. But its doors opened and only one very elderly old crone emerged. After a brief panic, I realised this was a bus from the far North. When the man had said 5 minutes it was a Greek 5 minutes, i.e. a quarter of an hour. And thus at 10.45 a very full bus emerged, from Athens, and discharged a blinking K who was clearly rather tired and so we headed straight back to the Hovel, agreeing to meet for cornflakes and coffee at 7 AM.

It was me who overslept so at 9 after cornflakes and coffee we started the 2019 harvest. I have learned a few things from George the Albanian. So the four mats were laid by the trees on the first terraces at the end of the drive. K is a very practical man and so took charge of the long electric twerker, as advertised here. I cut lower branches from the trees that were being twerked and also from a couple of marginal trees, one where it would be hard to lay a mat and where the yield is not that great and thrashed them with a paddle.

We continued in this way until a one o’clock lunch. K is a hardy man and seemed to need few coffee breaks. He wears industrial overalls and is a hero of the harvest. Gradually we moved the mats along the terraces and by the end of the day we had cleaned 14 trees and filled or rather part filled five sacks. We were conscious that there are quite a lot of twigs and leaves in the sacks and that they are nowhere near 50kg full. My guess is that we managed 125kg of olives. But the issue of the leaves and twigs is one that we put our minds to and heading down to the village and a meal at Mirandas (a delightful chicken and potatoes, ½ litre of wine and two coffees for less than 20 Euro) we started to make plans.

Incidentally, while lovely Eleni is strictly enforcing the new no smoking laws imposed by the EU on a resentful Greece, at the Kourounis taverna, at Mirandas there is defiance and nicotine in the air. On day 2 this threatened to become an issue.

There is only one other matter to report. The cat who I first fed milk to as a kitten and whose kittens died on the hovel last year is back. She is now coming here for morning and evening milk, still terribly wary of humans but it is good to see her patrolling the lands and still hunting for snakes, though not at this time of year. 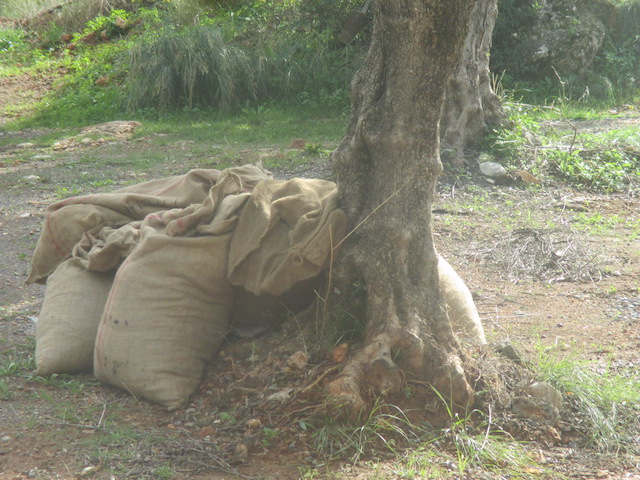