Photo article: day three of the 2019 Greek Hovel olive harvest, its Friday and my boy toy is here

As we had arranged after the Police raid, my friend Vangelis was waiting at the Kourounis taverna with his pick up truck at 8 AM Friday. I pitched up and when the owner of the hardware store arrived, late, we picked up my new boy toy, a portable olive sieve, loaded it onto his truck and took it to the Greek Hovel.

Vangelis admired the pool. He can’t swim but has plans to hold a barbecue up here which will involve a lot of drinking. I have suggested, via an interpreter, that he gets arm bands and goes in the shallow end with Joshua. He prefers the alcohol option.

Our third harvester T1 was raring to go and by the time Vangelis and I pitched up was already hard at work with the heroic K who is now very much the team leader. K cuts branches then twerks, we juniors thrash the branches with paddles and fill sacks. But until now much of what we have put in has been leaves and twigs. No more! In glorious sunshine, T1 and myself worked in T-shirts turning nine bags of olives and twigs and leaves into five bags of pure olive with some leaves. We are, I think working well as a team.

Supper was again Mirandas where thankfully there was no Vangels to ply me with booze and I stayed off the sauce completely having felt a little bit worse for wear in the morning.  B the end of the day we were, I think at 7.5 bags which would equate to 45 litres of oil which after press costs would net me 100 Euro, assuming I took no oil myself, which I will.  But it is only day three and our team is not yet at full strength. 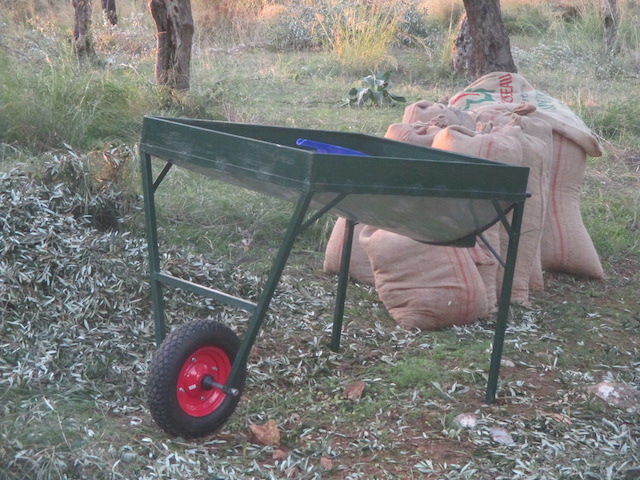