Even worse than the BBC, the death wish of a deadwood press that can't tell the truth

Rayshard Brooks was a black man shot dead by a US cop last week. The cop appears trigger happy in shooting to kill and, in my view, has quite rightly been sacked. But the reporting of the incident shows once again why fewer and fewer of us trust the mainstream media. Take this gem from Australia’s Daily Telegraph.

What actually happened was captured on the cop’s bodycam. Brooks was found slumped asleep in his car. He was breathalysed and testing positive the cops tried to cuff him. He struggled, stole a tazer gun from one of the cops and escaped. He ran but then turned and pointed the tazer at the Policeman. The Policeman shot and killed him.  Now marry that to the newspaper tweet below.

Is it any wonder that trust in the press and thus sales of newspapers continues to plunge? What is below is just plain and simple fake news 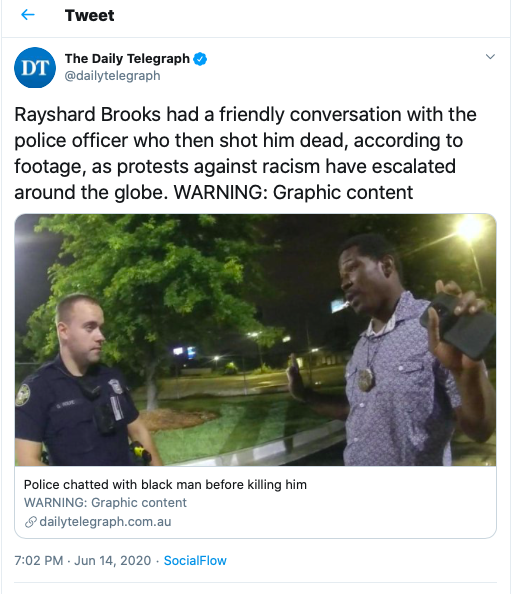