Now we are nailing the evil of slavery, let's not stop with pulling down Roman Statues, can the fucking Italians give me my mule and 40 acres?

As you can see below, the pathetic Church of England is facing demands to pull down a quite modern statue of Emperor Constantine from outside York Minister. Amazingly, the wretched CofE has now shown that it does have a spine and that this statue is safe, although it is looking at many others in light of the Black Lives Matter movement and issues surrounding slavery. And, apparently, it will also be seeking guidance from Justin Trudeau as to how to make statues of Jesus look less white.

But let us stick to the facts. Constantine was an owner of slaves and supported the idea and indeed my ancient British forebears may well have suffered as a result of his bloody imperialism and slaving.

What’s sauce for the goose etc. If we wicked Britishers are now facing demands for compensation for our, relatively brief, involvement in slavery and imperialism, what about the fucking Italians? I am a nice guy; there is no need for a mule but as for the 40 acres I feel I deserve: how about The Italians give me a slug of Tuscany? 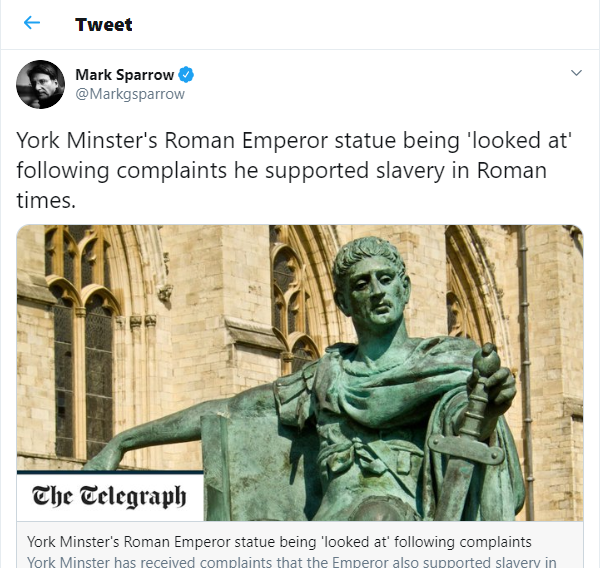