The Greek Hovel August 2020: Day 2 -water water everywhere (in our pool) but not a drop to drink

Feeling rather sleep deprived after our early Saturday morning flight to Greece, Sunday saw a collective lie-in at the Greek Hovel. Even the pest himself, my son Joshua, was snoring until well after ten. Then a morning swim. The pool is full and wonderful. Whatever time you get in the temperature seems just perfect. I am not sure how George the architect managed to fill it as there seems to be a bit of a water shortage. Now before you say global warming as some readers have already been quick to suggest, here are the facts.

The water for the hovel and indeed the whole village of Kambos comes from a reservoir up in the high Taygettos mountains which gets filled each year by melting snow. This year, as I noticed when I came for the olive harvest, there seemed to be less snow in the mountains than normal so there is less water and the authorities turn off the taps for up to 20 hours a day to preserve what pressure there is. Aha global warming you say!

Except that, according to lovely Eleni, it also happened ten years ago and indeed it has happened every now and again ever since the system was constructed. So it is not new. Ten years ago it was worse (i.e less snow) but this year there was another factor, Covid.

Reading Defoe’s 1722 account of the great plague in London, which is actually the first hand account of a survivor of 1665, the golden rule becomes clear: flee the big City on the first rumour so before you carry infection to smaller towns and villages and don’t go back to the Smoke till it’s all over.  And thus some of those who, for economic reasons, live in Athens but have houses in Kambos came back here in February and have stayed hence the population, and water usage, increased. Poor Nicho the communist seems to have his whole family here which has severely restricted his ability to quench his thirst. You can see how the poor man is suffering.

Worse still, what were bored residents of Kambos to do during lockdown given that many had lost their income or did not have much of one to start with? You got it! Grow more vegetables and fruit. Back gardens abandoned to nature and the snakes for years are now in use and productive. But to keep them productive you need lost of….water!

So, when the taps do work folks quickly shower and then fill up buckets to go water their trees and vegetables. Hence we have a water shortage. Eleni explained this all in detail and I coughed and admitted that someone filling his pool up at Toumbia may have contributed a small amount to the problem. My contribution to the problem is pictured in all its glory below.

On the flip side my eco-loos use far less water than conventional loos so I am not a total sinner. I did not mention that fact to Eleni, I am not sure eco-loos are the sort of thing a gentleman discusses.

Oddly, on our second day here after completing the swim, the skies started to darken. Up behind the us in the mountains, it sounded as if the giants were hurling boulders at each other with unprecedented fury. Soon the wind was rushing through the olive trees and in due course the rain started. It was only intermittent and lasted only a few hours so will have done little to ease the shortage but every little helps. 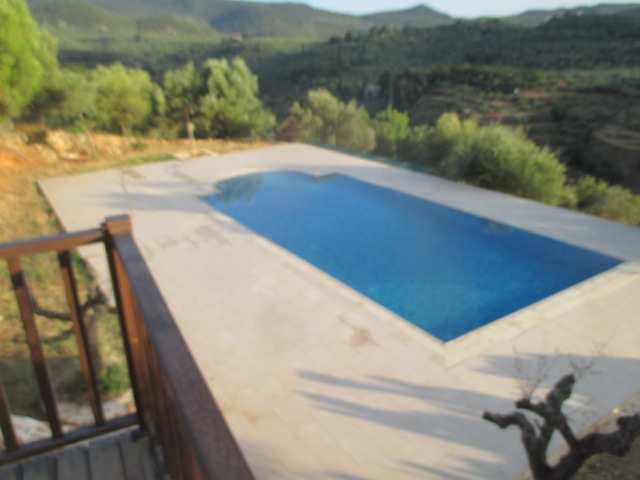