Councillor Fran Carpenter - the embodiment of a stupid authoritarian Tory

If you thought Simon Hoare was a one-off liberty hating halfwit within the Tory party, think again. It seems par for the course. Meet Councillor Fran Carpenter.

As things stand, Covid is the tenth most common cause of death in the UK, although most of those marked down of dying from it have some other life-threatening ailment as well. But in order to justify this Government’s civil liberties crushing and wholly disproportionate response to it, Fran has to pretend that the position today is akin to the dark days of 1940 as the Luftwaffe dropped hundreds of thousands of bombs on London. Golden rule: the first person to use Hitler or WW2 comparisons in an argument is going to lose it.

Fran continues with her rant blocking a journalist who makes a counterpoint. The last thing we need in this country is a free press holding the Government to account. Yeah, whatever. At the risk of losing an argument, I note that there have been certain European leaders who have also taken that view.

The Tory party once stood for freedom. That was a long time ago. 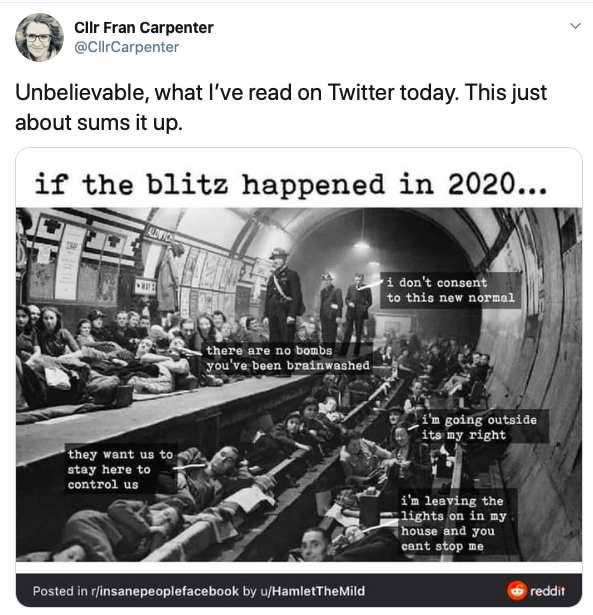