First up is the third of the fireplaces we discovered in the dining room kitchen. This wall had been covered in plaster with a small fireplace from the early 20th century. That was in front of the third of the holes in the wall and had been “restored” while I was away in Shipston. Sadly…

The builders restored the arch to look smart but modern. That is to say with big gaps between the “soldiers” and in some cases half bricks used with a gap between them. I know what the nice lady from listed buildings would have said so did not even bother calling her but just laid down the law. So yesterday the bricklayer came back and re-did his homework and it looks great. The plan is that a 4 oven aga will sit in front of this gap and a few inches either side and a light will be inserted in each of the three holes as part of plans to reduce ugly surface wiring for wall lights.

It was handy that the bricky was here as at least he knows what lime mortar actually is (lime plus sand). 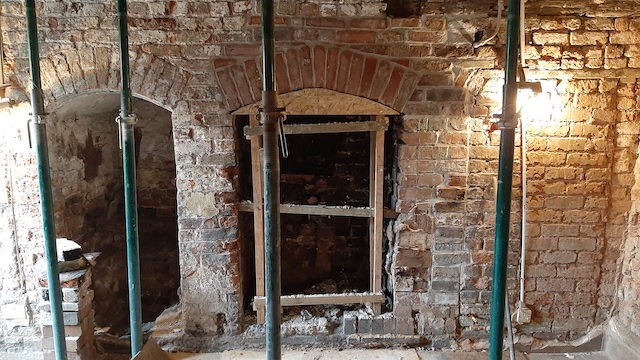 The fellows installing a wood burning stove in the main living room were not as switched on. This is why, as I  have to explain to an exasperated Mrs who does not want to live here while building work is underway, you must be around when builders are at work. This old fireplace was, when we arrived, largely covered with plasterboard with just a small 1970s style fire in the centre. Judging by the years of birds nest clogging the chimney that fire was never used.

If you look at the old beam from the 1600s carefully you can see the witches’ marks, flame shaped markings scorched into the beam to ward off evil spirits. Anyhow yesterday’s job was to rebuild the insiude of the firepalce with bricks. After a couple of hours I walked in and said “this looks wrong”. I queeried why the colouring between the bricks was so dark asking if the fellows were using lime mortar. Yup we are they said, fear not it will, lighten when it dries.  I pushed on, lime mortar you are sure? Yes lime and cement they said, elaborating that it was half lime half cement, like they always use on listed buildings. Yikes!

You do not iuse cement on such brickwork at all! It is a war crime against listed buildings. he folks who lived here before did just that on a number of walls and over the next half decade I shall be slowly unpicking their work and replacing with lime mortar. A quick consulation with the bricklayer in the dining room followed and six rows of bricks and cement had to be replaced.  The lining was then done using lime mortar and it looks just amazing, as you can see below. 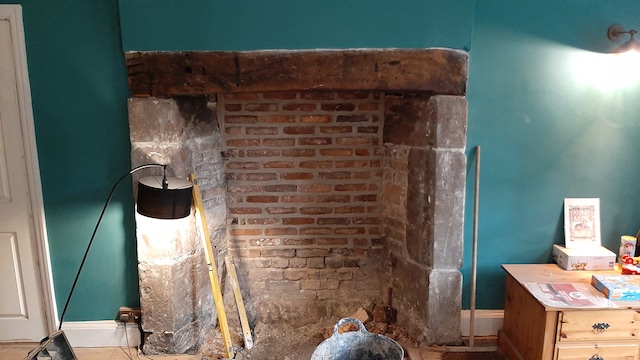