Public school, Oxford, 5 years training to be a City lawyer, couldn’t hack it, so went to work as a policy wonk & bagg carrier for Tory MPs, after 7 years an MP and three years later, Simon Clarke, aged 36, has still not risked 1 cent of his own capital as an entrepreneur or enjoyed one day’s managerial experience making decisions in the private sector. But who cares? That is the sort of chap today’s Tories think should be running Britain. Gone are the days when Tory MPs were entrepreneurs or businessmen so understood how firms grew and hired more staff and how wealth was actually created.

And thus today we have news that BritishVolt is to establish a battery factory to give jobs to 3,000 of us here in the Grim North.  You and I know that this is a decision made in the private sector by a company investing its shareholders cash becuase it expects to make an economic return. That is how capitalism works well when it us unfettered by useless parasites from Government intefering and shackling it.

But of course Mr Clarke knows better. He sees this as delivery by a Government which says it will “level up” the North, that is to say make us less poor when compared to folks in the South.

In reality, this news has nothing to do with the platitudes of folks like Clarke and his leader Boris. This is about the private sector. In the old days under the great Margaret Thatcher, the Tories not only knew this but acknowledged it. These days, worms like Clarke either do not know who creates wealth as they have never been involved in the process themselves or, perhaps worse, they do know it but dare not admit it and would rather pretend that an all powerful state has a grip on all the levers of decision making. 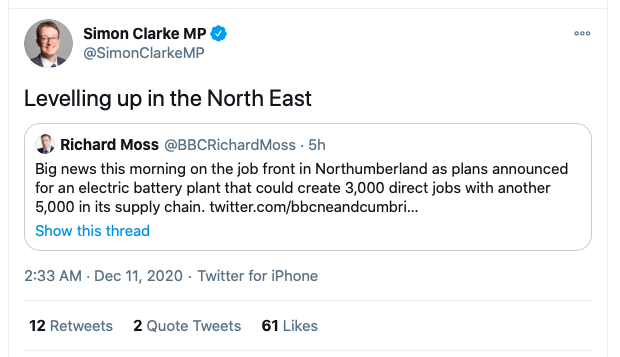