We started this tale with my wife suggesting that we buy a cat basket for Sian & Quincey our rescue cats from the grim North, that is to say Liverpool. “Oh no” I objected on their behalf, “cat baskets are for soft southerners, when we were young we lived in cardboard boxes”. I put two out and the cats dreamed of sleeping in cardboard boxes. “In the old days in the North we were poor but we were happy” they said, as in the Monty Python sketch.

But the Mrs, having the airs of someone educated – as are all the best deluded lefties – at a posh public school, thought cardboard boxes rather plebian for our rather smart living room and so removed one. “When I was young we only dreamed of living in a cardboard box, we used to sleep on a plastic bag” said Quincey. And as you can see here, in part two, that is what he did.

But the Mrs thinks that plastic bags are not very eco-friendly and would not want one on display were a member of her book group to break lockdown and pop around for Fair Trade decafinated tea to discuss the latest Victoria Hislop. And so the bag was removed. “When I was young” said Quincey “we were so poor, we could only dream of sleeping on a plastic bag, we used to sleep on the floor.” And he did as you can see below. 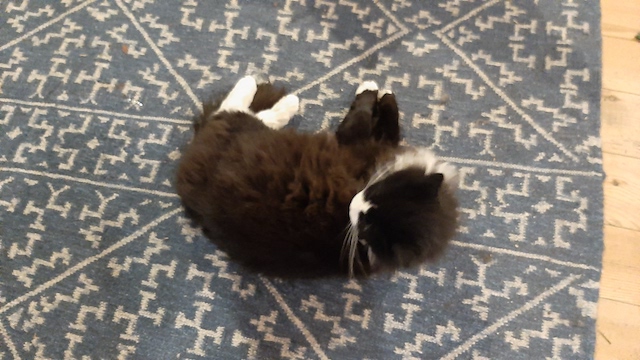