Christian Aid & the Samaritans can feck right off, they will not get a cent of my cash

I wrote in my weekly Tomograph Newsletter HERE this morning that, by this June, I hoped that over the space of four years, myself and my fellow rogue bloggers would have raised more than £200,000 for the amazing, if unfashionable, Woodlarks charity. That would cover about two years of its bare minimum running costs and absolutely every cent I have raised will go for the purpose it is intended for, enriching the lives of severely disabled young people. There is zero going on management or other purposes. How unlike some bigger names.

My dad used to give to Christian Aid on the basis that it was doing God’s work in helping poor people in poor countries not to starve and to avoid nasty diseases. Given my family history, I applaud the way the Samaritans stops folks killing themselves and if I gave to it I’d like to think that everything I gave went to that end. As you can see below, that is not what is happening.

My old father would have been horrified to find that Christian Aid is hiring someone on £55,000 a year as their “Race & Diversity lead”. That is a vast salary and the all-in cost to the charity will be closer to £70,000. That is cash folks like my Dad thought was going to help poor folks in Africa, not rich Guardian readers in London.  When folks give to Christian Aid it is not the diversity of its workforce that they care about but helping a very un-diverse group of folks in places like Africa.

I have a horrible feeling that my father left Christian Aid a few quid in his will. If he did, I am tempted to challenge it on the basis that all those begging letters he received talking about how his cash would go to helping starving folks in Africa were fraudulent prospectuses.

Most people in this country would like to see folks in Africa leading better lives and fewer folks killing themselves. But in the end, if Christian Aid and the Samaritans follow other organisations such as the National Trust in pushing a woke agenda, their ability to raise finance will suffer and who is that going to assist? 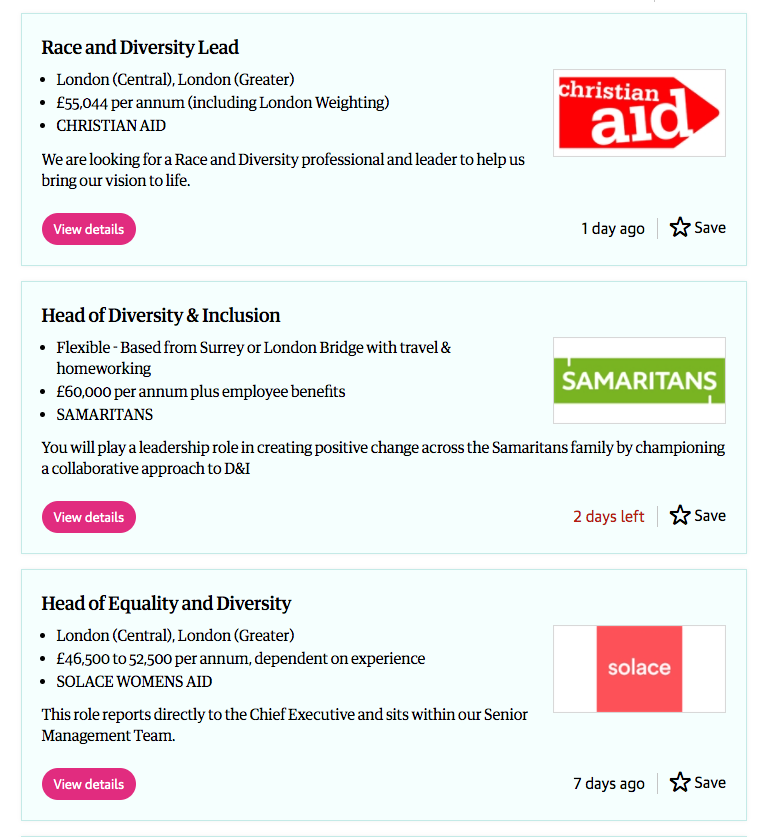