As I explained last week, I regard it as wholly desirable that the land in which I live, by 30 yards, that is to say Wales, throws off the imperialist yolk of the English infidels and gains its independence. But that should not stop me pointing out how ridiculous some of the Welsh people have become and that nearly all of its leaders are imbeciles who are not mentally capable of running a cat’s home let alone a country. Among the most ridiculous of our politicians here in Wales are those who will win my support next time, the folks from Plaid Cymru, the self-styled “Party of Wales”. This organisation, founded 95 years ago, declared itself neutral in World War Two as the rest of Wales signed up to fight the evil of Hitler. That was an early sign that Plaid has a tendency to choose for its leaders, folks who are as thick as two short planks. No. That is an insult to the planks. This brings me to its leader until last year, a short plank by name and nature, Leanne Wood.

She has today tweeted an endorsement of a tweet made by actress Miriam Margoyles, a millionaire who, Polly Toynbee style, has a second home in Tuscany. It is great being in Tuscany where you can opine on the struggles of the British working classes without actually having to meet any of the odious little people. Margoyles has been holed up in Tuscany since the start of the pandemic refusing to come back to Britain. Every cloud has a silver lining.

Today she opines, and Wood endorses, the idea that Britain has suffered a right-wing coup and that is why Boris Johnson and Princess Nut Nuts are running the country. Gosh. If only they were right-wing. But a coup? Boris is able to wreck the economy because he won an election while parties supported by Miriam and Leanne lost. What is so hard to understand about that?  If the smelly peasants had voted the “right way” and Jeremy Corbyn was running a minority government supported by, say, the cottage burners, then one suspects that Miriam and Leanne would be using rather different language.

But this is how many on the left now think. If they win a contest then the people have spoken. If they lose, it’s a coup or the people did not understand what they voted for. Even Donald Trump now accepts that he lost the 2020 election. It seems that Mirian, Leanne and others have yet to reach a similar conclusion about the 2019 British contest let alone that referendum back in 2016. 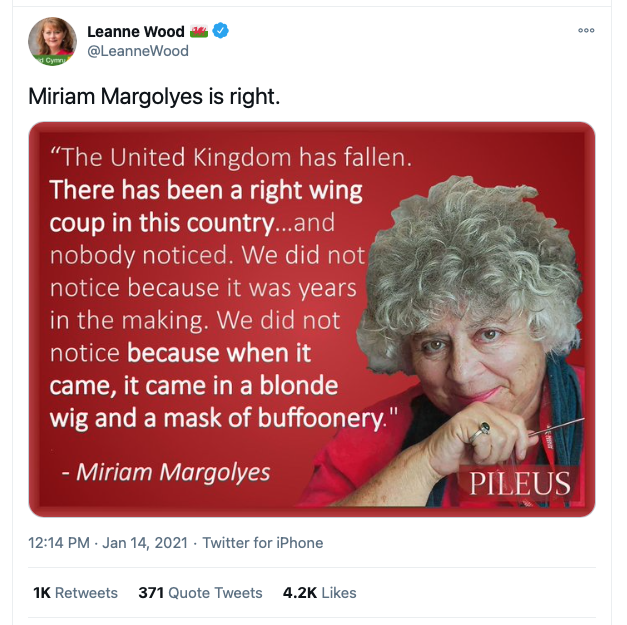