The woman on the left in the picture is the multimillionaire landowner who is the Tory candidate in the by election in the post industrial working class ghetto of Hartlepool. Such is the State of the Labour party that the Tories will probably win this poll. But just to make sure, this lady and the Prime Minister went to the local football club to kick a ball to show that they really understand how the working class think. So what is your caption? I shall kick off with:

Lady millionaire barrister & landowner: “Dont pick it up, its not the Wall Game, try kicking it to show you are at just like the smelly oiks”
Boris: “The last thing I kicked this hard was some pleb who dared to try to get into the Bullingdon Club.”

Seriously, what is it with politicians pretending they like football. At the last election the ghastly Labour creature in these parts – who I now discover is a third cousin by marriage – made great play of going to cheer along Wrexham FC. Was anyone fooled that she was a lifelong supporter or indeed knew the faintest thing about soccer? I doubt it, but these folks inside the bubble think, that somehow, showing they love “the people’s game” will make the people love them. Whatever… 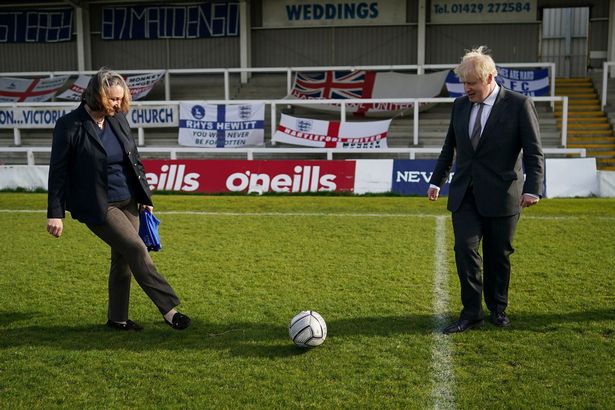