I was only joking when I suggested that someone here in the last village in Wales, snitch-on-Dee would report me for having a bonfire. But hey ho..meet Abi Lancelotte, the teenage curtain twitcher.

When I was her age I was having my stomach pumped after a drinking contest with John Salt, dancing in the front row at the Powerhouse looking up at the short skirted Bangles on their first UK tour, smoking anything I could get my hands on, fooling around with Abbe Aronson, before she broke my heart, and pogo slamming at a Ramones gig on the Lower East Side. That is what youth is for isn’t it?  But it seems Abi would rather twitch the curtains at her parent’s house, photo my bonfire 250 yards away – with the smoke blowing away from her – and post a whinging complaint on the village Facebook site here in Holt.

To be fair to our fellow villages, she attracted so many comments about how silly she was that she then removed the post slinking away in shame.

A fellow villager has sent me the post below and suggested I confront Abi but I shall not be. In my day job I get death threats, harassment via midnight phone calls and shit sent in the mail. Abi really is a minor irritant.

Youth is such a fleeting moment. Before you know it you are worried about the annual performance review at your first job, how you can afford the mortgage payments and wondering why your trousers seem to be getting a bit too tight and why all modern music is rubbish.  Youth should be enjoyed before it is all over.

My advice is to kick the snitching habit, get your mum to drive you into Wrexham, score some weed, try to get a boyfriend or at least some friends and some bottles of vodka. Listen to some music and chill, girl, chill. 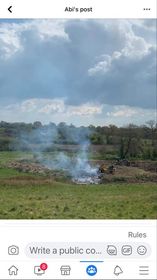