Che Guevara was the “hero” of the Cuban civil war whose face adorns T shirts of the naive across this globe. He would have been 93 today and folks like Union boss Howard Beckett are rushing to praise him, showing their complete ignorance of history, as you can see below. The left often hates history. Facts can be awkward. So Howard celebrates with the late Che showing solidary with other victims of racism, homophobia, transpobia, etc, etc. Er…

I am not sure what Che thought of Trans folks. I suspect that was not a big issue back then but judging by his fews on the LGB’s I doubt he’d have rooted hard for the T’s. We can gloss over the hundreds of folks he took pleasuring in executing in his five month stint as Governor of Santa Clara prison for Che was a blood soaked old killer. Let’‘s just deal with the real inconvenient truths. Let’s start with the homophobia.

Che campaigned to have gay people placed in prison, and when they were interned, they were treated worse than the rest of the prisoners. If a gay prisoner committed even the slightly infraction, he was beaten mercilessly. Cuba’s LGBT rights record was bad before the revolution, but under Castro and Guevara, concentration camps were created and filled with homosexuals. He helped set up the infamous Guanahacabibes camp in 1960.  Gay men were barred from the military and in the concentration camp where gays were sent and many died there was a sign which said ˜Work Will Make You Men.’  Not quite arbeit macht frei but almost.

What about the blacks? Che liked them even less!  After the 1959 Cuban revolution he said “We’re going to do for blacks exactly what blacks did for the revolution. By which I mean: nothing.” He wrote that Africans in South America had maintained their racial purity because of their “lack of affinity with bathing.” He also said “The black is indolent and a dreamer; spending his meager wage on frivolity or drink” and referred to Mexicans as “a band of illiterate Indians.”

Well Howard and all the other lefties these are the facts. Are you quite so sure that Che is a man to idolise? 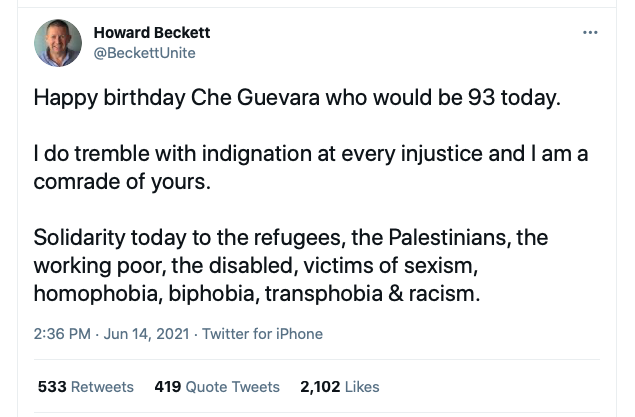