My Christmas presents for those outside the immediate family, friends, relatives and neighbours are a combination of Yarg cheeses, dried chillies and Greek Hovel olive oil.  There may be the odd jar of home made jam chucked in to the mix. 17 Cheeses arrived on Wednesday. Four are for personal use as the whole family of the Mrs. will bless us with their presence. The rest, sometimes as halves, are to be dished out.

I hope to see my five siblings next week but you never know what will be allowed here in Airstrip One.  The rest of what is to be sent is to be posted ( four cheeses, some packets of chillies and some olive oil) or hand delivered. Joshua and I will be on a Santa blitz in North Wales tomorrow dropping off parcels all over this village, the ones around it and to my Aunt L who lives the other side of Mold

Two cheese deliveries were made last night and, as you can see, four more whole cheeses were dropped off in time for the post today -one cheesein a box originally made for two but now stuffed with paper. Now it is time to parcel up the bulk of the remaining gifts, write a card with a design based on Jaya’s footprint which, is I accept, not very biblical and prepare for tomorrow’s deliveries.

In a spirit of efficiency, which would have won praise in the Wehrmacht, I have, as of today, also now ordered every item we need to bring in for two Christmas meals as well as other associated jolity with the in-laws.  Ho Ho ho. 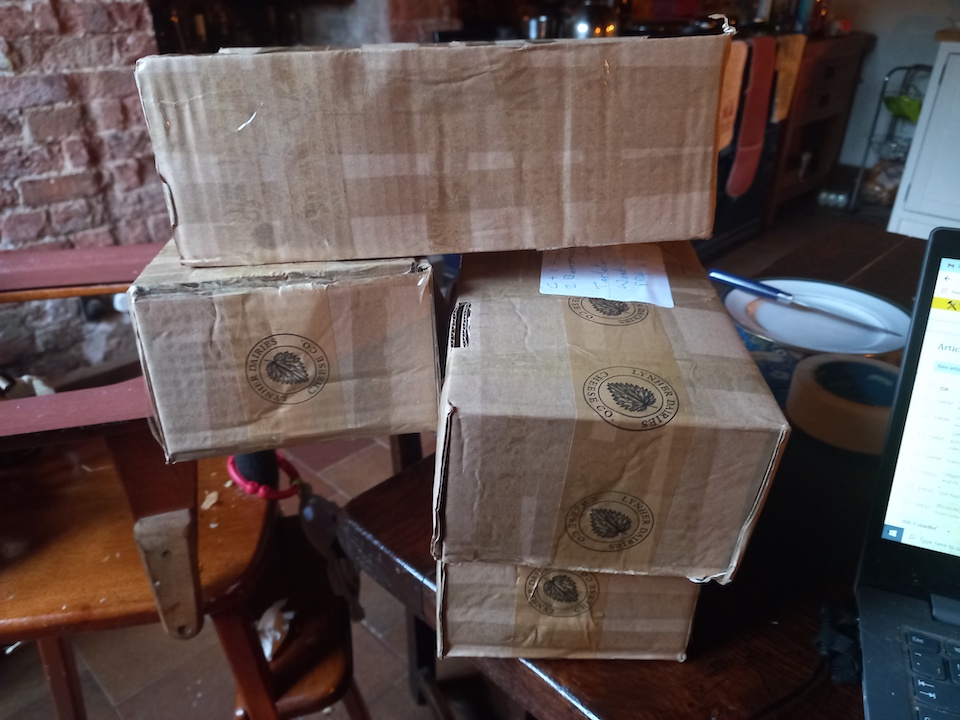