You may not know this if your knowledge of American politics is gleaned from the BBC, ITV or Channel 4 Fake News but the populaity ratings of President Joe Biden are dire, far worse than that of the man who really won the last election, Donald Trump. Biden’s Vice President Kamala Harris has even worse ratings than her boss. As I noted here a few months ago,the Dems will get a whipping in the mid-terms,leaving the GOP in control of the House,the Senate and the Supreme Court. Could things get any better for we God fearing , Gun supporting, hard working conservatives? Yes they could.

After the drubbing coming their way in November the Dems will panic and will start to consider dumping President Biden for 2024. They know that Biden vs more or less any Republican, including The Donald, will see the GOP win the General and cement its control on Congress as well.In fact leading Dems are not waiting for the fall to play Brutus.

With Harris excluded, as even the Dems know she is a sure fire loser, could they possibly select a worse camndidate than Biden. Yes sir. The dream candidate for Trump is starting to drum up support with her friends penning Op Eds such as the one below. In writing such material they are merely being Good Germans. The Clinton crime family is actively pulling the strings here.

You thought Crooked Hillary was medically unfit, corrupt to the core- even paying for that crazy bogus Trump Russia dossier – and unelectable last time? She has not got any better! If Hillary manages to persuade Biden to stand aside, then to rig the Primaries, as she did against Sanders last time, #Trump2024 is a racing cert. 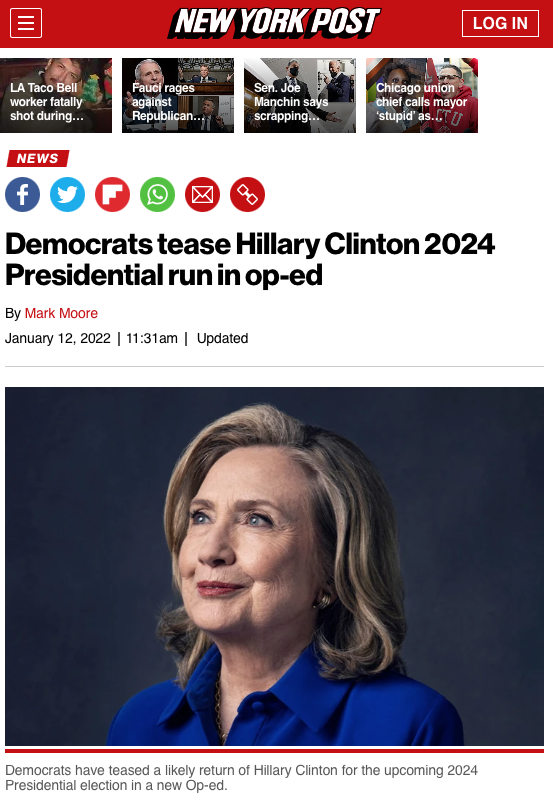