Don’t get me wrong but this is a glorious day. The Mrs, the kids, Joshual’s pal T and her parents who are visiting us have all been packed off to the seaside. It is expensive and crowded so they are welcome to it and, better still, they cannot get back until late tonight. So I have a day of solitude, of writing  and of swimming and it is heavenly. It is what this place was built for!

The issue is the 400 yards of concrete track leading up to the mud track through the olive groves that lead to the Greek Hovel – snake hill as it is known after more than one spot of encountering my least favourite form of wildlife diversity.  Snake hill is twisty and steep and has appalling potholes which might put off some folks wishing to rent this luxury eco palace with pool.  I have been asking the village council ( 4 employees for 537 people) to mend the road as it is obliged to do, for a couple of years.

But this is Greece and so I have had to take the matter into my own hands. So I arranged last week to have the same folks who fixed other holes when we were building the place a few years ago to come with a truck and fix this once and for all. With the Mrs et al dispatched to the seaside I wandered down to the top of snake hill, glancing nervously at snake well and other places where I have spotted dsiversity over the years, and met up with the men and their beast of a concrete mixer that they had driven up the hill.  The driver did a 97 point turn to head back down and then inched forward as I pointed out holes for filling. He stopped by each of them, droped off some concrete which two other men used to fill a hole and smooth it over, and on we went.

By the time we were at the bottom of the hill, by the dry river, and parted company I was drenched in sweat. It is 40 degrees plus in the midday sun. I then climbed, rather slowly, back up the hill and up Slater slope all the time watching for wildlife diversity. Back through the olive groves I wandered, all alone and dripping sweat until I reached the stand pipe in front of our house and drunk coool water as if it was the nectar of the gods. Then a swim and then the peace and quiet I crave but which has, to date, been denied me. Writing and swimming undisturbed while the sticky, but now rapidly drying, concrete keeps the noise-makers away. Bliss. 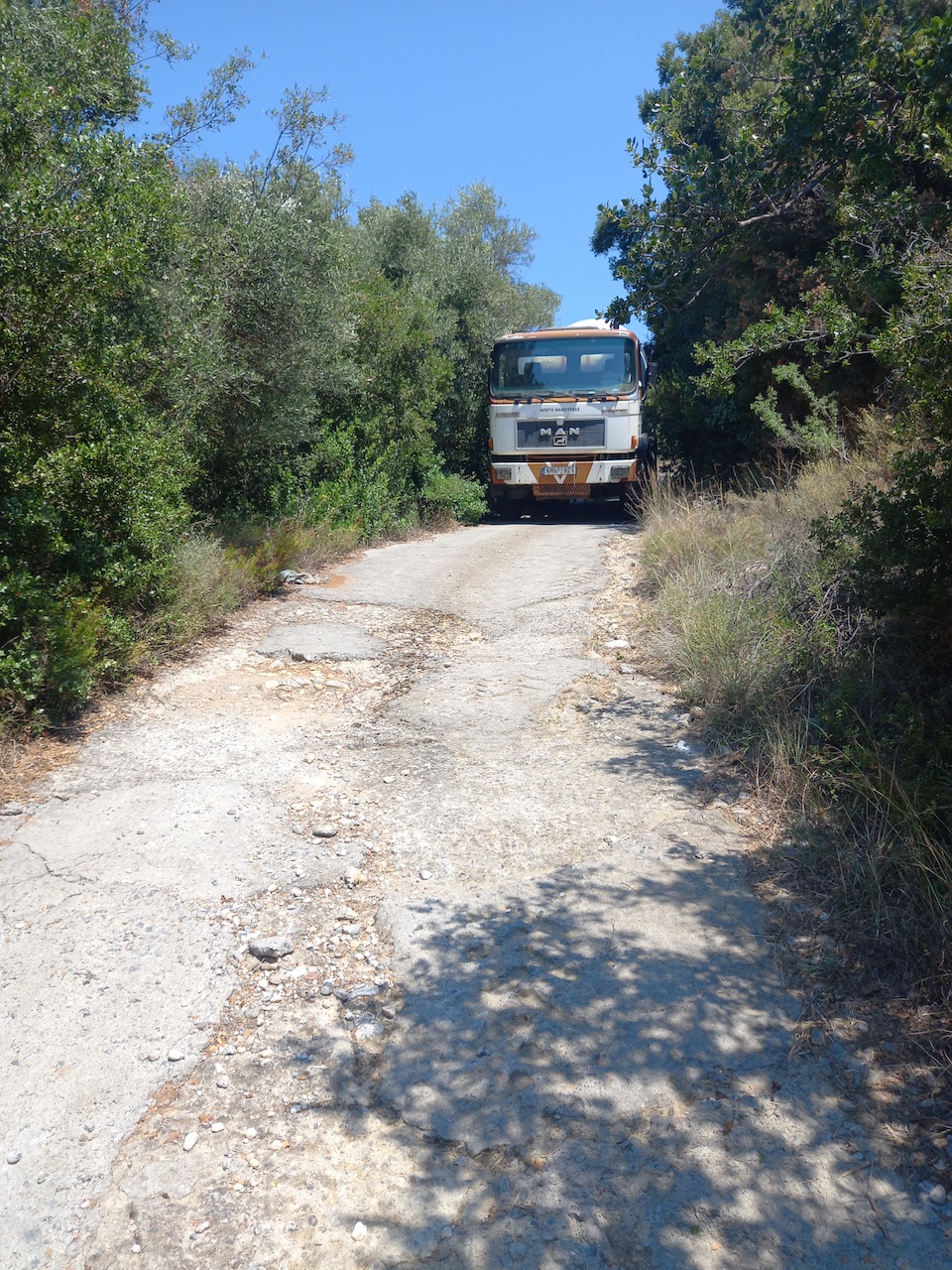 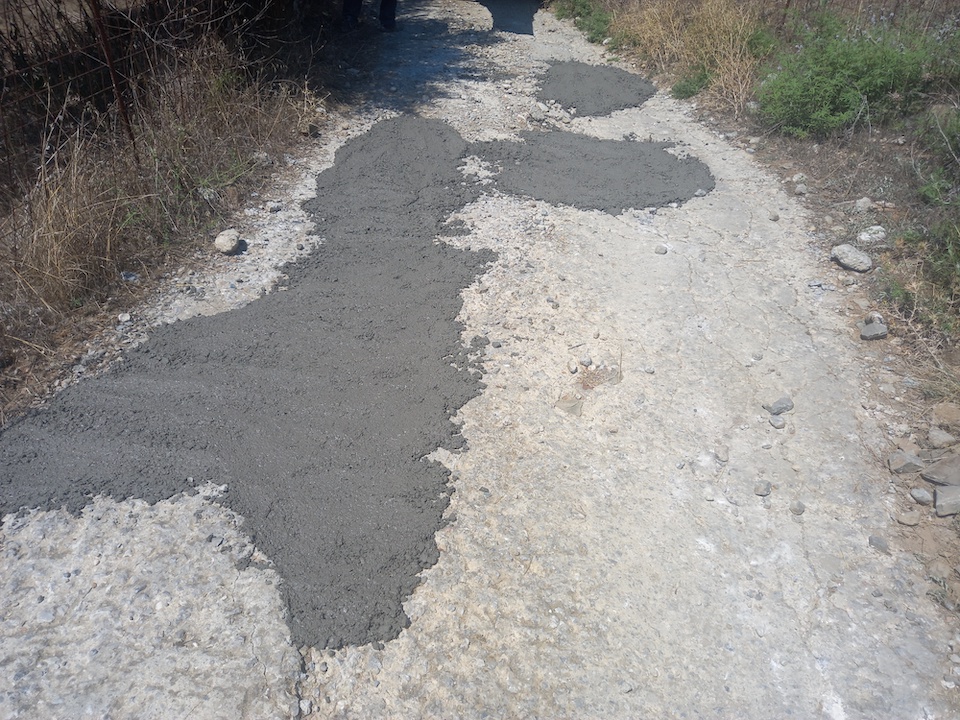 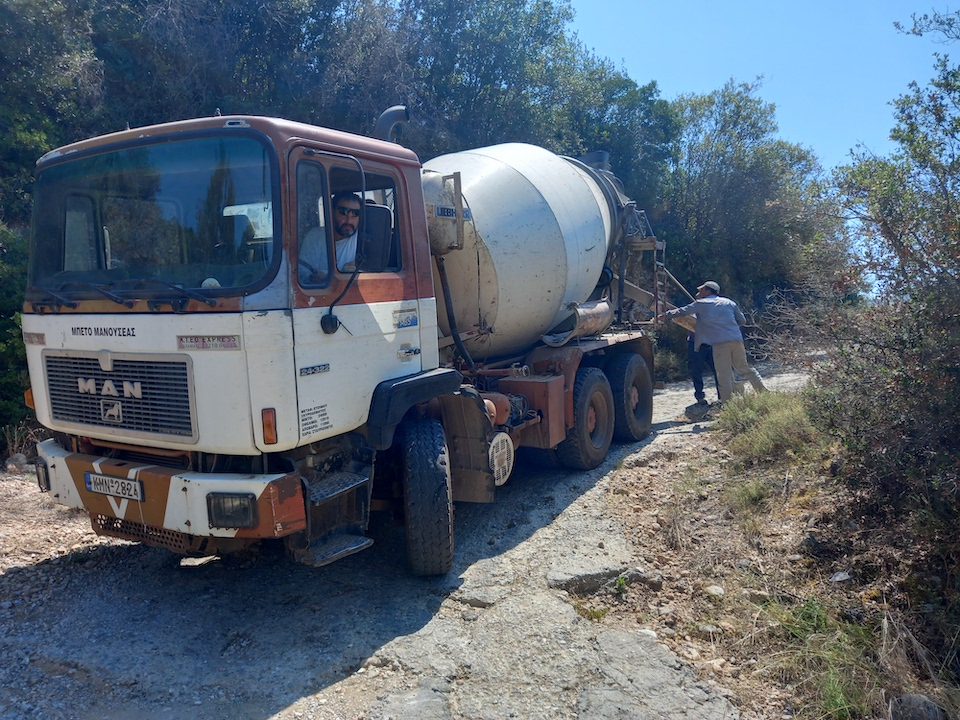