Ammar Mifleh was a man with a career in terror which on the West Bank means trying to kill Jews.  Last week he attacked an Israeli soldier, trying to steal his rifle. In that attack he stabbed the soldier in the neck. The soldier pulled his gun and shot Mifleh dead. The whole incident was caught on video so there is no doubt what happened. But the UN’s  Special Coordinator for the Middle East Peace Process, Tor Wennesland offers his take below.

The video is clear. Mifleh was the assailant. He tried to kill the soldier who avoided that fate by defending himself. When the UN is so clearly partial what hope can there be for it to play a part in creating a real peace? 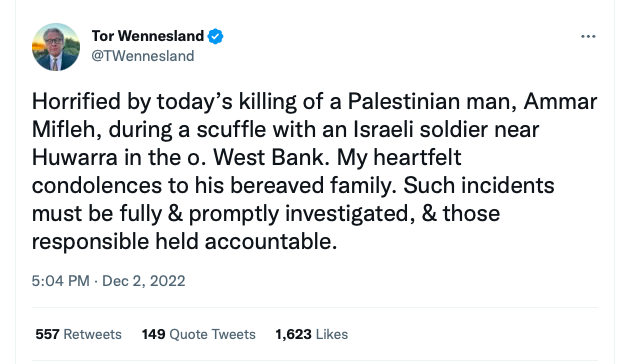