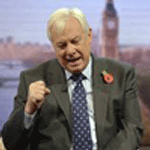 48 hours ago, the chairman of the BBC met the ghost of Christmas Past. If you missed that you can read it HERE

In the second part of the Chris Patten’s Christmas Carol last night, the chairman of the BBC met the ghost of Christmas Present. If you missed that you can read it HERE

After his twice interrupted night the good Lord Christopher Patten, chairman of the BBC, was awakened by a gentle kiss on one of his many chins. Then came another and another. “Lavender” he mumbled but awoke to find that the good Lady Patten was still snoring gently beside him.

Instead Chow Mein’s now near senile successor, named - for some reason - by his staff in Hong Kong as Dim Sum, had managed to clamber onto the four poster bed to wish his master a Merry Christmas. Lord Patten took the hint and, after putting on his ermine dressing gown wandered downstairs, eagerly awaiting the delights of Christmas Day, starting with breakfast.  Quoting to himself the old Chinese motto “a man who has a solid breakfast is built to grow”, Patten rubbed his tummies and thought hard about the first meal of the day.

Breakfast would, as always, be prepared by his faithful eighty year old manservant Cawkwell. For the good Lord was a man of habit. For him merely a “healthy man sized” portion or two of freshly prepared kedgeree made with line-caught haddock and Tuscan organic eggs from the Toynbee estate, followed by locally produced bread lightly toasted ( as only Cawkwell knew how) covered with Honey flown in from Argentina with a healthy bowl of porridge to finish off.

But Cawkwell, or for that matter his breakfast, was nowhere to be seen and so feeling rather peckish the chairman of the BBC wandered into his study where he had a hidden stash of mince pies. These had been craftily concealed from both Dim Sum and Lady Lavender under a stash of printed emails marked “Saville –URGENT action needed now 2009” which he was planning to start reading after Christmas.

Lord Patten looked at the 14 foot tree, decorated last night by Cawkwell while the family watched carols from Kings but something was not right. Rummaging at the foot of the pine (a present from the Russian state broadcaster to thank the BBC for showing the world how to cover news in a balanced fashion) there seemed lots of presents for Lady L and even a few for Dim Sum but none for himself.  “Jeepers” muttered Patten to himself “what the blazes is…”

“Only those who have been good boys get presents from Father Christmas” said a deep voice from behind him and Patten spun faster than one of the 450 good people employed in the BBC public relations and brand enhancement department to see yet another grey figure lolling in the armchair next to his desk.

Patten obeyed, conscious that the BBCs Christmas homage celebrating the birth of Nelson Mandela was set to start at any minute. BBC One thought Patten but he could not find it. Two? Three? Digital 5? CBBC? They were all nowhere to be found. Instead Patten found himself scrolling through a series of ITV and satellite channels most of which seemed to be run by Rupert Murdoch.

The News channels were leading with a story about how the new BBC Centre at Salford was opening its doors as an all-faith (except Christians) Community forum. Patten shouted angrily “but where is that beloved national treasure the Beeb, where has it gone?”

The ghost replied gravely: “It is 2019 and with no viewers at all the Government tried to privatize it but there were no takers so it was sold to the Guardian last Christmas for £1 to use for tax shelter and it has now closed it down.”

“Cripes” said Patten. “Can it be saved?”  The ghost replied: “You could start providing impartial news, high quality content and stop pissing the license fee away on managers and programmes no-one wants, you could apologise for past errors and…”

But at that moment Patten heard the distinct sound of Cawkwell emerging from the Servants quarters and so interrupted the ghost:

“Look old fellow I will commission some consultants to look into it and we will hold a full internal enquiry and all that sort of thing but my tummy is rumbling and brekkie is on the way so can you be a good chap and just bugger off.”