Thrashing away hacking back the frigana, I am reminded of a short story from the depression

I once read a short story but for the life of me cannot remember its title or author but it comes to mind as I toil in the fields at the Greek Hovel, slashing away with my frigana cutter below.

A man is travelling across America in the 1930s with his family in search of work. They drive up to a wonderful farm surrounded by fields of amazing corn but it is abandoned. They cannot believe their luck and just move in. The man cuts corn and his family have all the food they need. One day he hears a cry as his scythe goes through a sheaf of corn. His kid is dead. They bury it. A while later the same thing happens again, another kid is dead. And then it is his wife. He realises the corn is humanity. He is the grim reaper. The only way out is to cut the stalk that is him and he slashes wildly to find it. Folks who drive by see a man crazed, just cutting away all day and all night. The Holocaust, Hiroshima, he thrashes on and on, cutting corn at an unprecedented rate.

Can anyone remind me what this story is?

Meanwhile I slash at the frigana here at the Greek hovel. There appear to be some islands of the vile plant left which have escaped the cutting of 2014 and the poisoning of 2015. They stand there green and defiant challenging me to risk snake attack and to wade in for an assault. I am not sure what i would do if a snake emerged from the frigana. I like to think I'd plunge my cutter, with its whirling blade of death, straight at the serpent. I rather fear that I'd drop the cutter and run like the clappers. I pray that I am not faced with this problem.

But I feel like a man possessed and just wade into the bushes and attack. Yesterday I managed four sessions - one can cut for only so long before the machine over-heats and cuts out. Today it is a cool day and the machine wanted to go on until it ran out of petrol and so did I. Slash, slash, slash. My father, reading this, would have been thinking about his former colleagues at the University of Warwick. The grim reaper was searching for his own straw. I sometimes think of other folk but mainly just want to nail the frigana once and for all.

The frigana when alive is a shiny green. After just three days in the sun the plants that I have slashed have been blanched. By next month they will be brown. Already there are satisfying patches of white next to the brown areas I poisoned last year.

This afternoon it is back to olive pruning. There is only so much death one can hand out. It is time for a bit of nurturing and life. 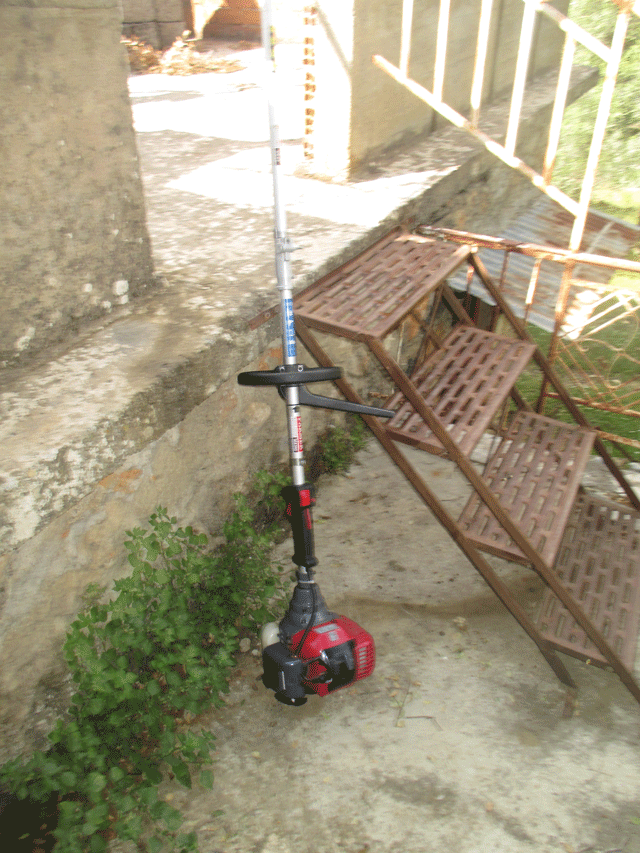