Most of the national press is now reporting responsibly on the sad death of Jo Cox MP yesterday. Any life cut short is a tragedy. A murder of any sort leaves one feeling appalled. Ms Cox was obviously a principled and pleasant woman and one only imagine how her husband and kids feel. But the reaction of far too many supporters of the "in" campaign does need comment for it was disgusting. I reported earlier of how I received one tweet saying that as a pro-Brexit writer I had blood on my hands, as you can see HERE.

That article also showed how the sad death of Ms Cox was being used by the lefty online pressure group Avraaz to push its supporters to vote to stay in the EU. But worse was to come and it came despite the fact that, by 6.30 PM yesterday, it had become clear that the killer of Jo Cox was a loner with no political affiliations at all and who had a long history of serious mental illness.

One witness claimed that the killer, Thomas Mair, shouted Britain First as he murdered Jo Cox. That is the name of a tiny Fascist grouping. On twitter we were assured that Britain First were keen supporters of Brexit. Others saw this as a cry for Brexit. The only trouble is that the killer was not a member of Britain First or any political grouping. He had no links at all with it in fact. He had once subscribed to a South African magazine which supported apartheid but a long while ago and friends are quoted as saying he had no interest in politics or the referendum. He, however, had a keen interest in cleaning himself all over every day with Brillo pads.

And worse was to come for Project Smear as no no other witnesses came forward to say they heard the words Britain First.It soon transpired that the main witness was on record saying he heard no such words.

In his grief, the husband of the late Ms Cox said his wife was "killed by hate" and vowed to fight the forces of hate. That is laudable but as things stand the evidence is that Brendan Cox is incorrect in his assessment. His wife was killed by a man with a severe mental illness who had only just been released from psychiatric care. I have written before about mental illness. My mother killed herself. We do not, in this country, discuss many issues relating to mental illness at all seriously. We trivialise and insult those with mental health problems. Perhaps now we might take a different approach and that might just be the legacy this killing deserves.

But not to let the facts get away in the way of an opportunity for political gain various folks linked this murder directly with Brexit. Either as Mr Mair was a supporter of Brexit ( which he appears not to be), or that he supported Britain First which supports Brexit (but it appears he had no links at all with the fascists) or because folks like me writing about Brexit stirred him up ( which we did not and this is simply an attempt to gag debate).

EU Commissioner for migration Dimitris Avramopoulos was an early entrant in the tweet smear noting "Jo Cox murdered for her dedication to European democracy and humanity. Extremism divides and nourishes hatred. Solidarity with her beloved".

Dimitris must by now know that what he tweeted was just untrue. Has he apologised? Nope. hard on his heels from overseas came crooked Hillary Clinton who claimed that this was a "violent act of political intolerance." No Hillary it was not, how about you apologise too? Back in the UK few could trump the loathsome Daily Star whose front page is below although the Guardian is this morning still not challenging the Britain First link and stands by its thesis that this may be linked to political extremism.

Labour MP Neil Coyle when commenting on Ms Cox's murder started talking about campaign material from Vote Leave saying that this inspired folks on the far right. He was making a direct link. He again does an immense disservice to a rational debate on mental health as - at the same time - engaging in the the most loathsome of smears.

Words almost fail me. Will the Star, Ms Clinton, Mr Coyle, Dimitris and all those folks who somehow linked the actions of a man suffering severe mental illness with Brexit and with those who campaign for Brexit apologise? They will not. They hope they have planted the seeds of doubt of smear in the minds of the electorate and if they get the result they hope for next Thursday they will not care how they won that victory. It is an episode of shame for them but they have no sense of shame, their words and actions make that all too clear.

I would hope that for once Britain can have a proper mature debate on mental illness and how we care for those who are mentally ill. But far too many in Project Fear do not care about that debate and are happy to trivialise mental health issues. All they care about is a vote happening next week. Shame on the lot of them. 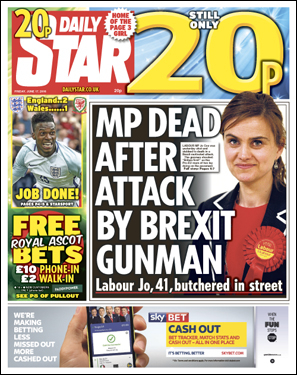