Photo Article: day one of the olive harvest 2016 at the Greek Hovel

In 2014 we harvested 1.65 metric tonnes (1650 kg) at the Greek hovel which yielded 566 litres of olive oil. Last year was a disaster - 550 kg and I fell and ended up in hospital. So far 2016 has been a triumph. I did not fall. Albeit with a few breaks I lasted the full working day and we have already harvested 550 kg with only a fraction of the trees finished. It is a triumph but I am shattered.

The first thing of note is that we have new technology. No longer are the trees only hit with plastic paddles but there is now an electric device - is it called a twerker? This is a sort of vibrating rake and it is a pleasure watching my colleagues wield it. My colleagues are, of course, George the Albanian and two women who, I think, are his wife and sister in law. After three years I should know but am too embarrassed to ask. Not that I speak Greek or Albanian or they speak English.

George is our leader so his main job is chopping branches off trees with his chainsaw. 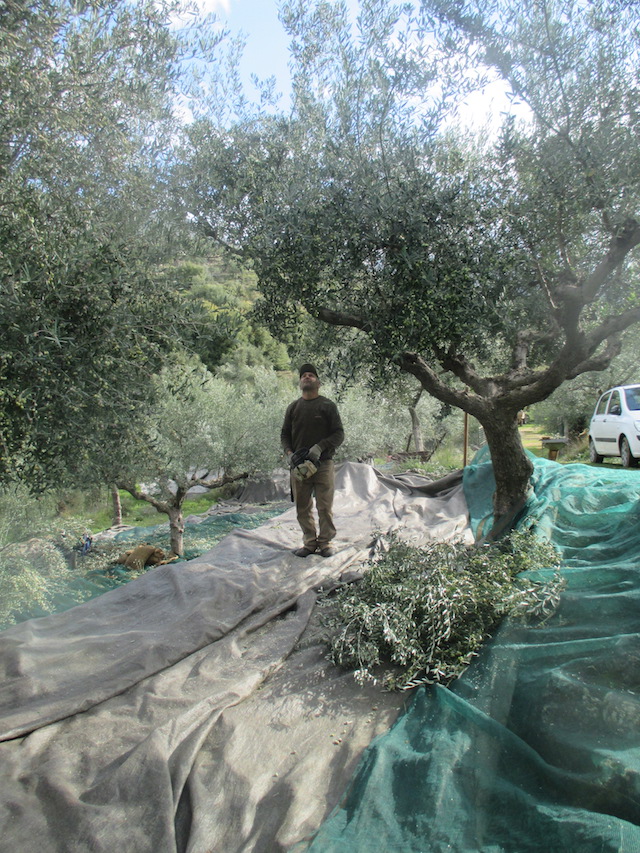 These branches are then taken to a threshing machine where they are expertly flailed. This is skilled work so, naturally, I am not allowed to do it either. My first job is to carry the branches from where they fall to where the flailing machine, operated by lady 1, is wheeled to. 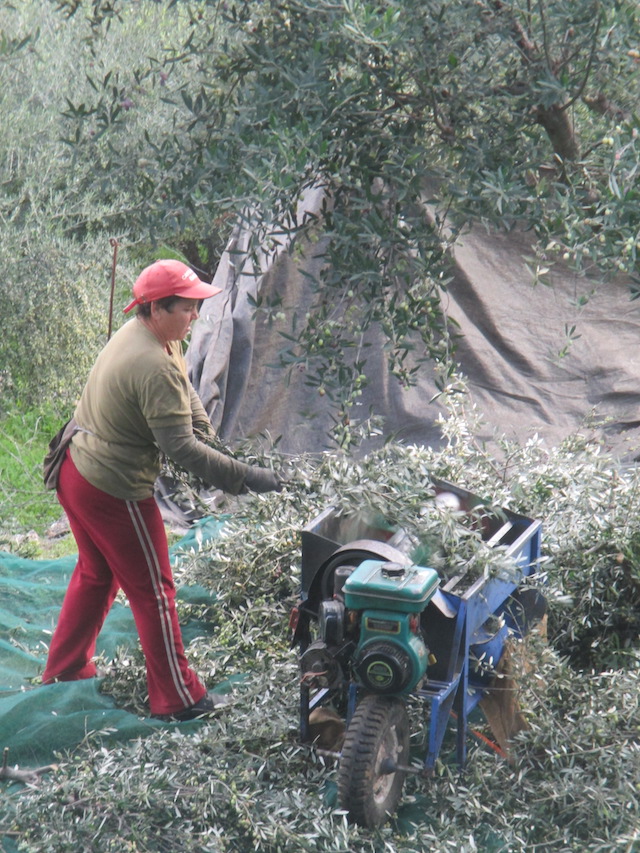 All the time we walk across the mats which are laid down by the ladies. This too is quite a skilled job and so naturally I am not party to it. Most of the branches are not cut from the tree but sit there to be attacked by the twerker or, now and again, by George wielding an old style long plastic paddle. But the twerker is king. Naturally it is a skilled job and so I am not allowed anywhere near it although I really do want a go and might ask to use it on the last tree so that if I break anything the harvest is in the bag. 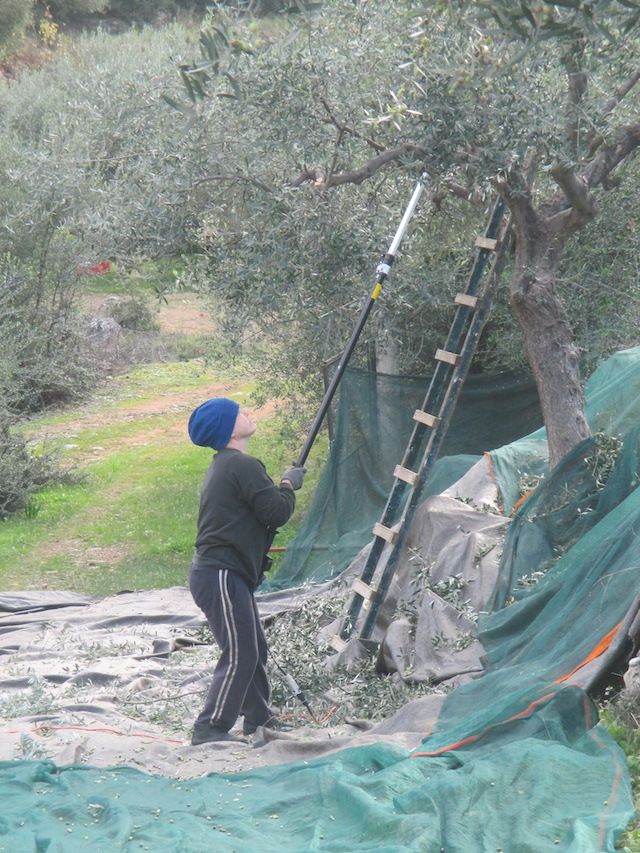 Watching lady 2 or George wield the twerker is watching an artist at work and, as I take an occassional breather, I do just that. 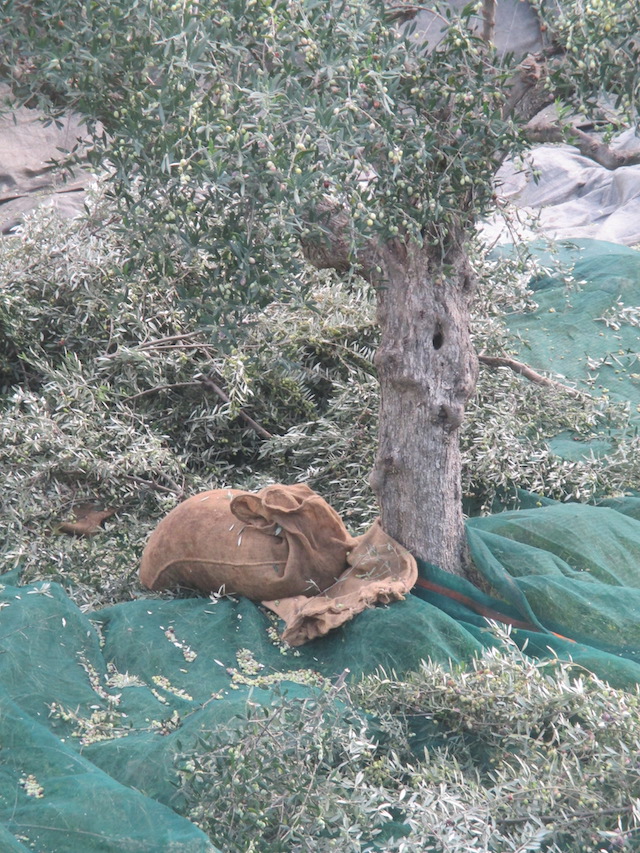 In due course the mats are rolled up and the olives plus small twigs and leaves are poured into another machine. This is a skilled job and so is left to the ladies. But at this point my second job comes into play. 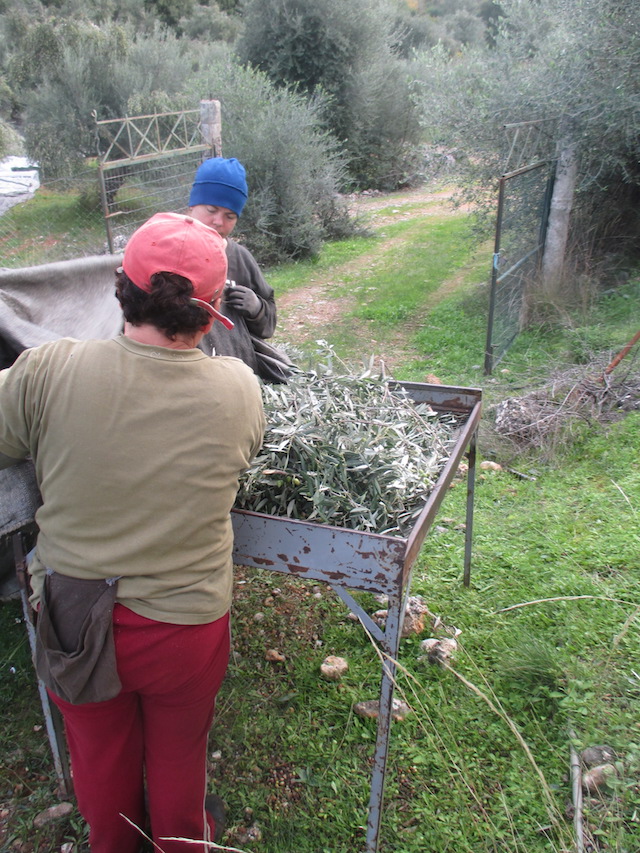 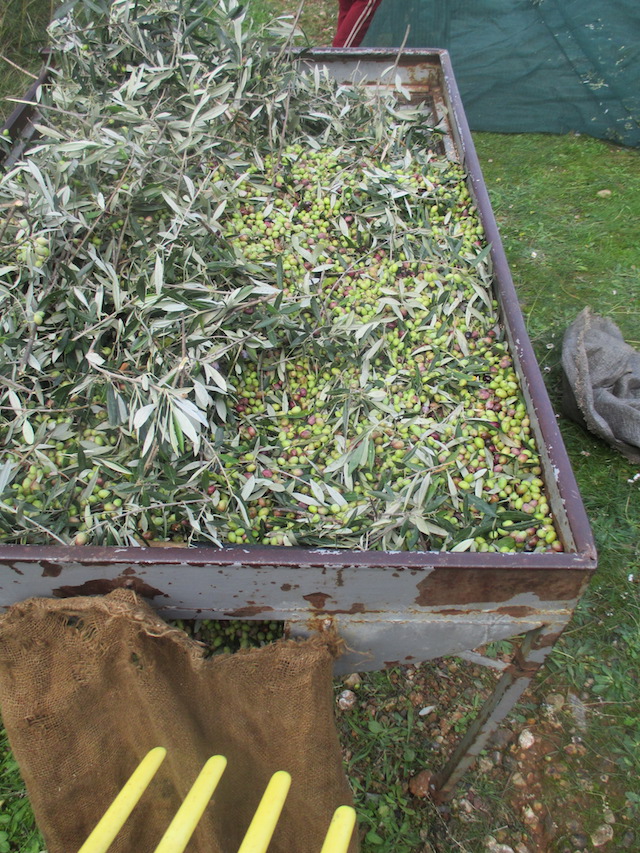 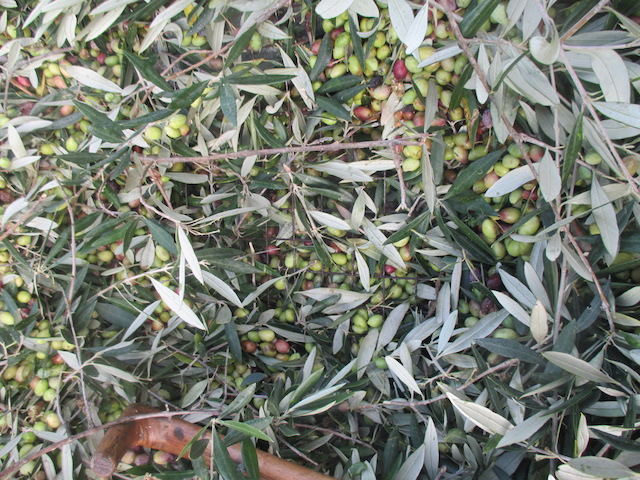 This machine has no moving parts and is very simple to operate. I think that normally it is what the old women do. But in this case I am the old woman and the old women have been promoted. Using the wooden stick one beats the leaves and twigs and the loose olives until all olives are loose and fall through the mesh on this tray and then slide into a sack. Even I cannot screw up on this. It is quite tiring but really satisfying as you see your bags fill up.

At the close of play George summonsed me and we wandered around the half filled bags with me holding one as another was emptied into it by George so making one full 50 kg bag. George can lift them easily. I rather struggled, straining muscles I had forgotten that I had. The bag below is two thirds full. By close of play we had 11 utterly full 50 kg bags. 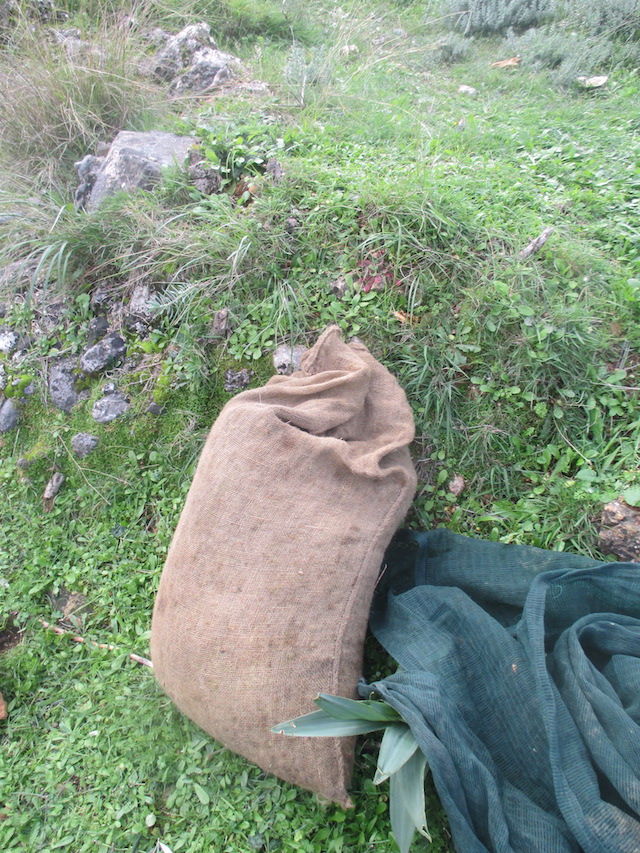 I now invite you to consider a before and after photo. The first is of a tree dripping with olives and thick with leaves. It is the BEFORE photo 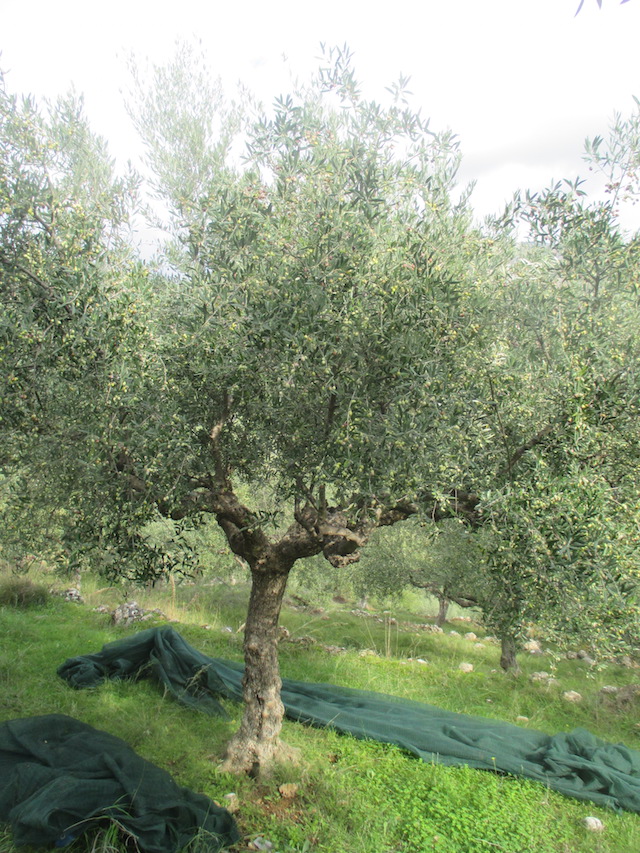 And below is what a tree looks like after it has been twerked. Can you see the difference AFTER? The sun shines through a tree that really has been stripped back, shaved and cleansed. 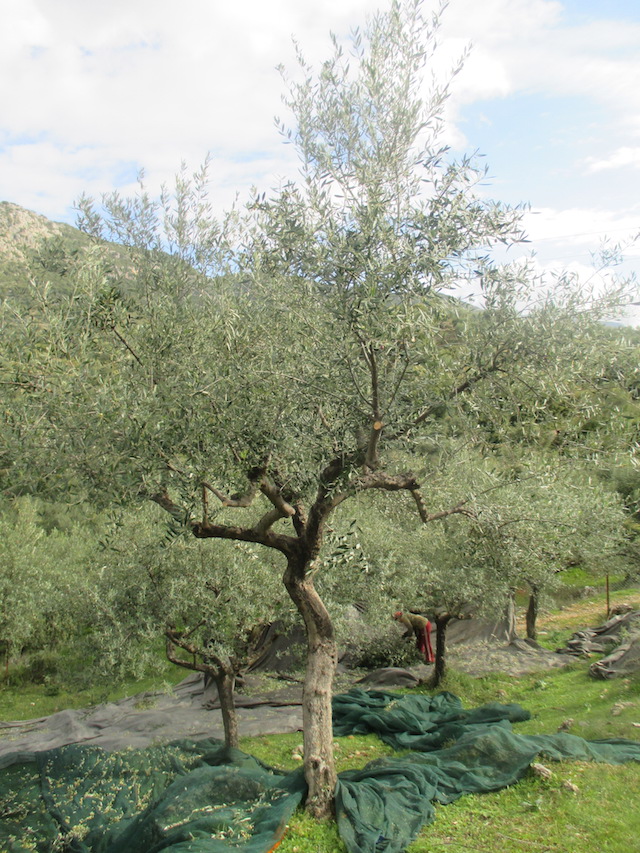 We started work at 8 AM sharp. That is 6 AM UK time which is the time zone I am still operating on. By 2 PM Greek time I was aching all over and it started to rain. Normally rain stops play and indeed on the neighbouring patch of land a team lead by my neighbour Charon and including the goat-herd and several others did stop for a while. I was at that stage thanking God that I might get an early break but George and his ladies just carried on. These Albanians are made of sterner stuff.

In one of my short breaks I went over to say hello to the heavily moustachioed goat-herd (not to be confused with the Shepherd) who, as ever, spoke to me in Greek knowing that I do not understand a word of it. But he had heard about Joshua and, having four children of his own, the Old Goat, kissed me on both cheeks to say well done before kissing the photo of my baby son on my camera. It seems that the whole village of Kambos knows of Joshua's arrival which is touching.

Now I am back in Kalamata. Tomorrow we start again. 8 AM sharp. No rest for the wicked. A long hot bath is greatly needed.