Photo Article: What a small world as I revisit Warwick School to discuss abuse 40 years ago

The current abuse scandal of the day concerns young men from Winchester College who were beaten savagely at some Christian camp attended by the current Archbishop of Canterbury wet Justin Welby. As if to make the scandal even more at the heart of the establishment Cathy Newman of Channel 4 Fake News told us that Winchester was Britain's oldest public school. In a sort of post fact era maybe. It was founded in 1382.

My own school Warwick was founded in 914 AD so, even in a post fact era, it is much older than Winchester. I believe that four schools are even older than Warwick: King's Canterbury and St Peter's York being the only two I can name.

The Warwick School of c914 was in town not on the edge as now and clearly had many structures over the centuries that followed. Warwick today is essentially a child of the nineteenth century. It is really a nouveau school and thus it only got around to getting its coat of arms with the words Altiora Peto ( I seek higher things) in the last Century. How do I know this becuase as I entered the building there was a document sent to the school from the College of Heralds.

It was signed by a senior herald of the time, Arthur Cochrane. That would be Sir Arthur to you, the nouveaus at Warwick, Sir Arthur of the Cochrane's of Edenmoor House Co Donegal, my paternal Great Grandfather. Neither my father or I had ever noticed this before.

Flagging this up was a good way to break the ice with the Headmaster as I headed back to discuss the sadistic abuse handed out by school teacher Geoffrey Eve to myself and others some 40 years ago. 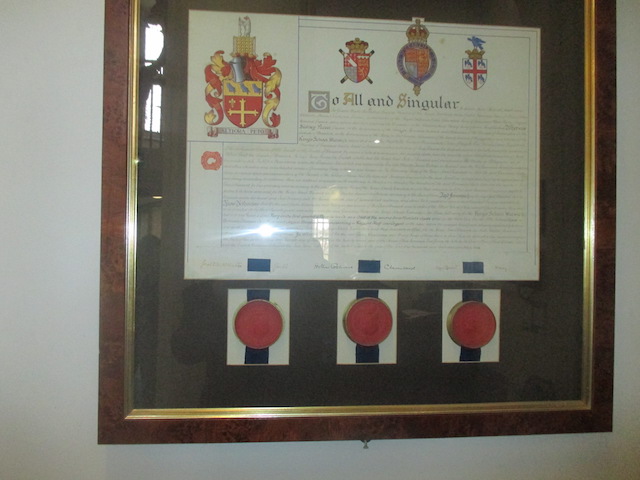