Photo Article: The walk to Anelion Part 1: gosh my Dad was a hero 40 years ago 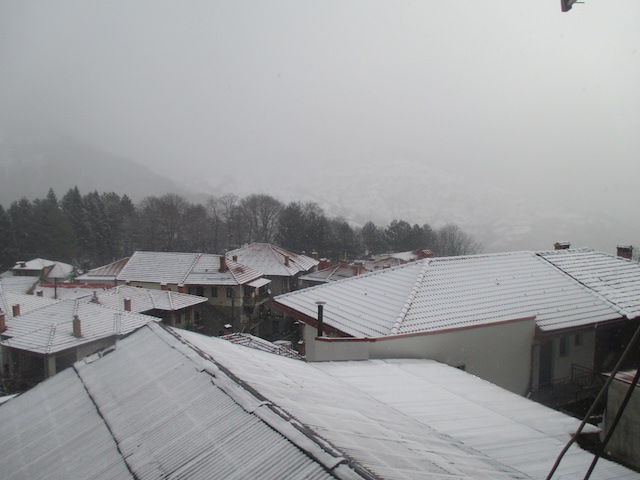 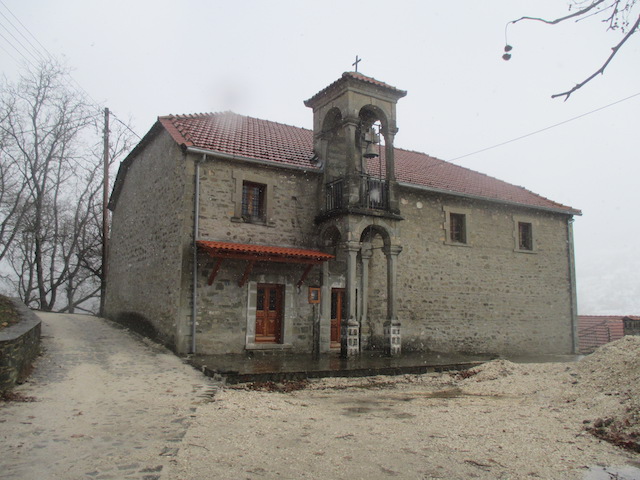 With the snow still blowing, I set off on the walk from Metsovo to Anelion not really believing that it would take only half an hour as the chap I met last night had told me. Perhaps it was because I took the scenic route through the lower terraces of Metsovo, following the signs marked with a bear print. Evil Knievil has emailed to suggest that we bears stick together and do not eat each other but, more importantly, as I headed lower I remembered that bears, like snakes, hibernate. So the bears of the Pindus will be sleeping, dreaming of honey and Rob Terry. The wolves on the other hand... 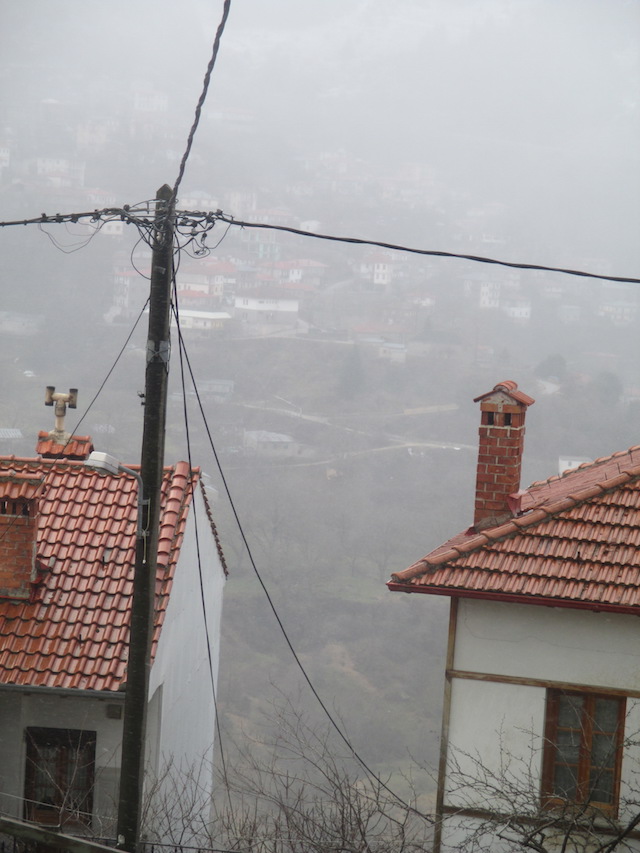 As I headed lower I caught my first site of Anelion in the mist. I began to think that this was going to be a bit of a slog. I thought of my father carrying suitcases and, sometimes, children as well, forty years ago and thought what a total hero he was. 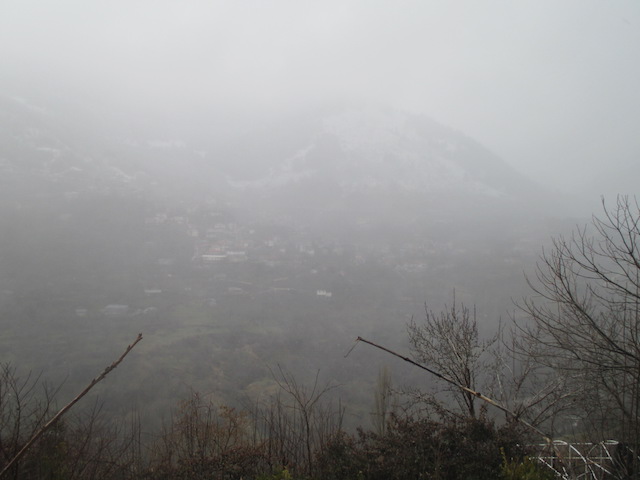 As I headed down the slope I caught my first full view of the valley that separates Metsovo and Anelion. In the summer the river meanders along and it is so shallow you can walk across it. Now it is, as you can see, a raging torrent. 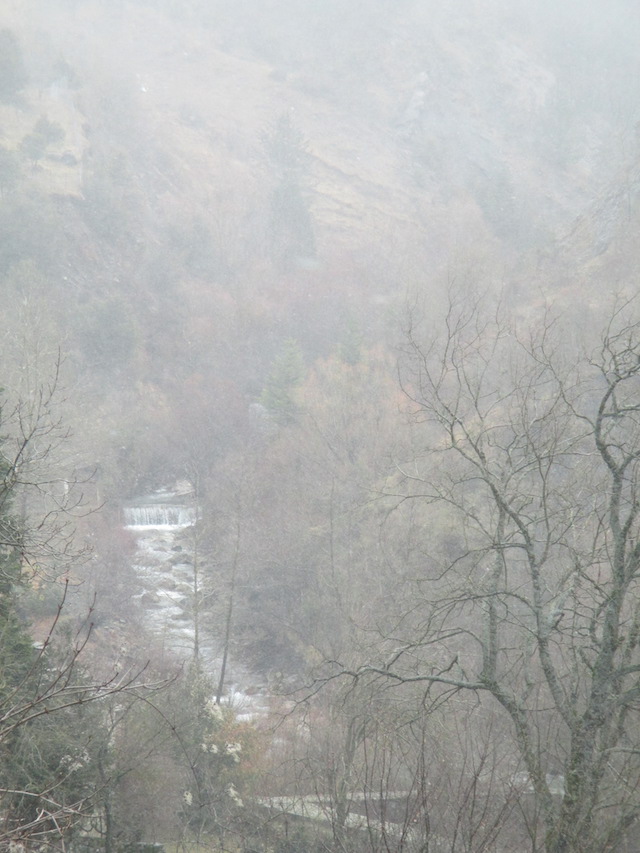 I crossed the old bridge and lookd up and down the river. Downstream you can see the newer bridge that was built with the road in the 1980s. And above it a monstrous new bridge traversing the valley. Thank the EU - it is your taxes that paid for it. 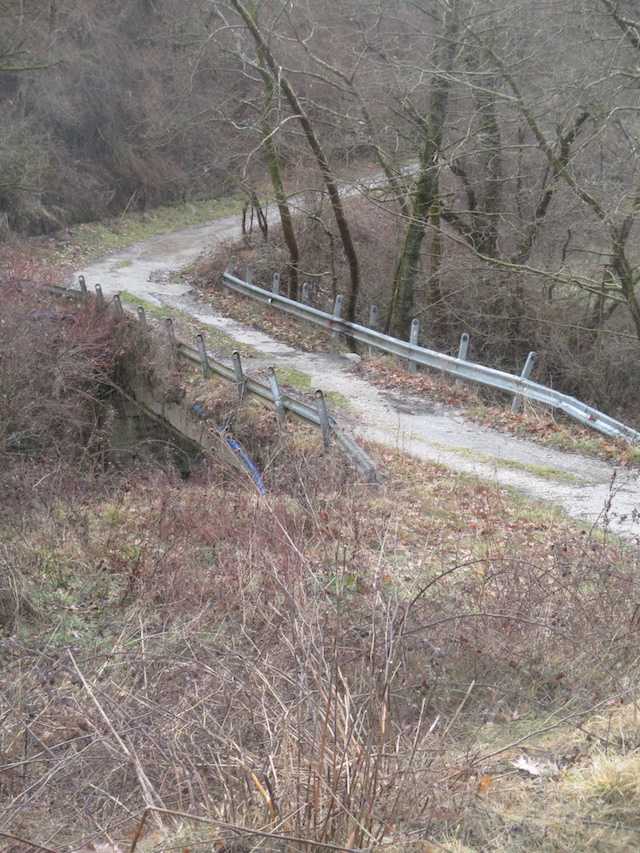 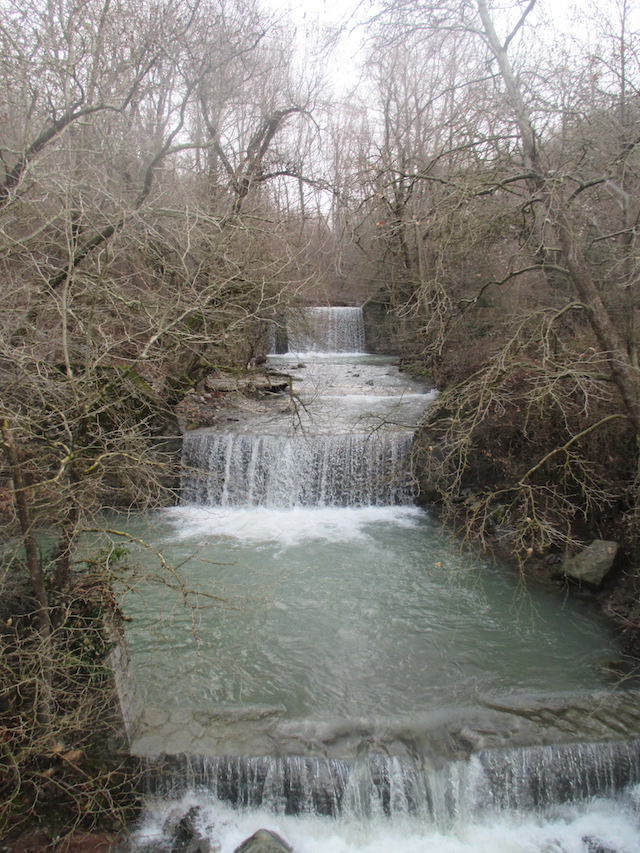 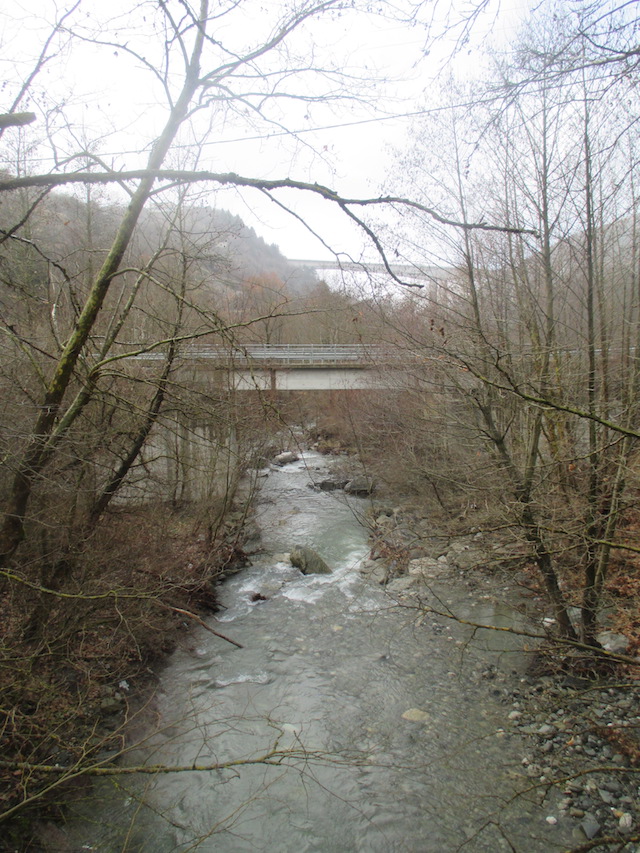 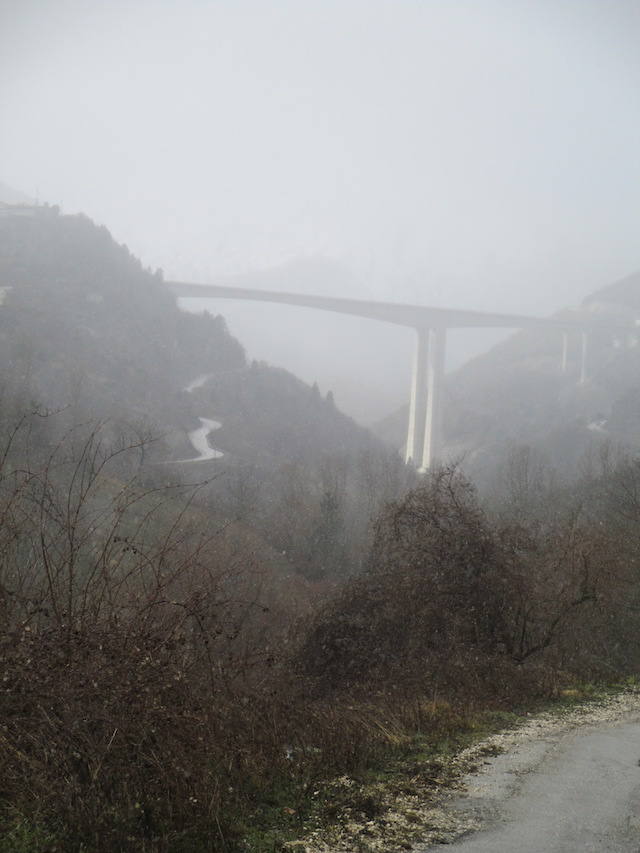 On the other side of the bridge I faced a choice. The old path we used to use or the longer but less steep route by road. I tried the first but it was just so steep, showing again what a hero my father was all those years ago. It was also rather slippery and I have no wish to do an Uncle David Cochrane and I retreated gingerly and started up the road. Bloody hell it was a hard slog and I was fairly breathless as I reached Anelion. Mike the Vlach bloody well better be alive after all of this. 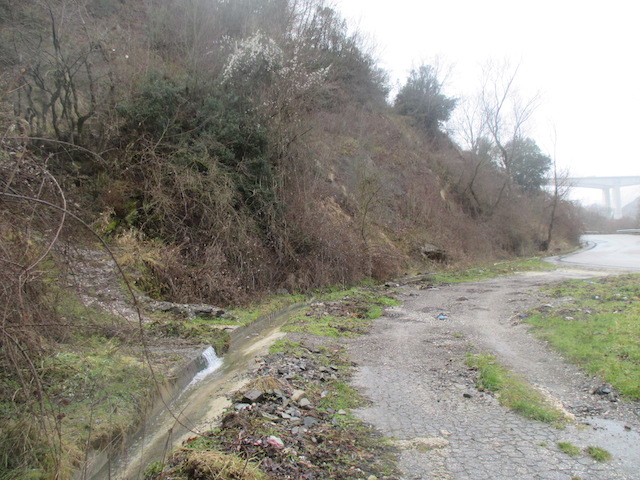 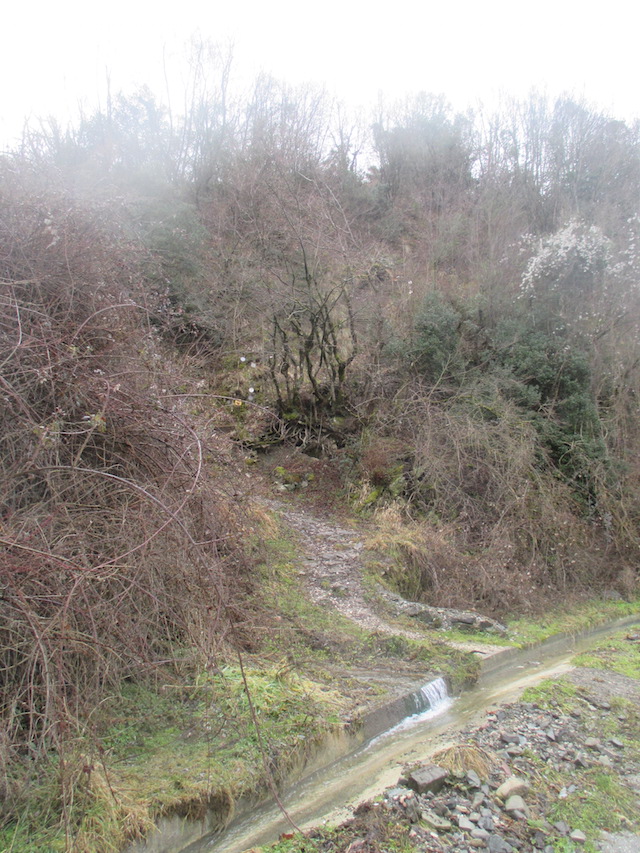 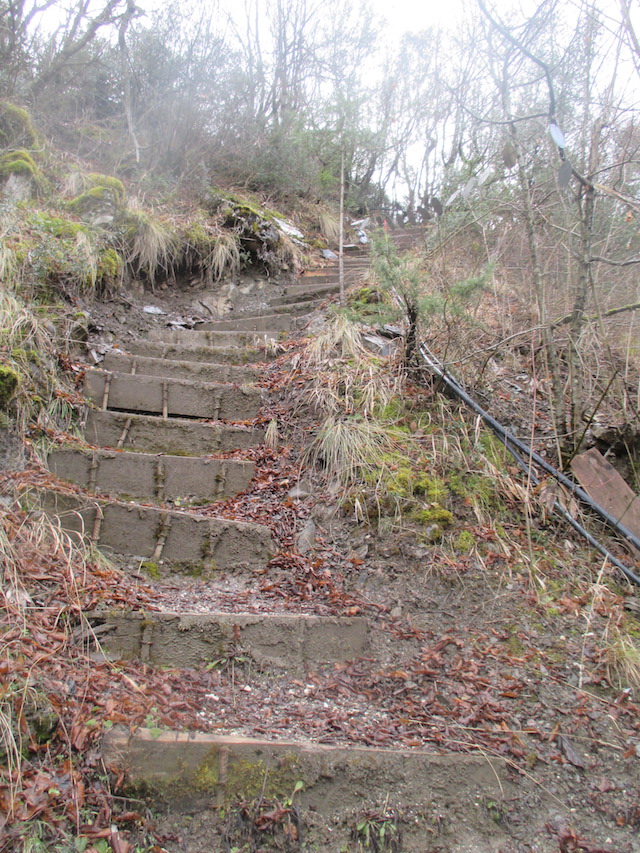 To be fair the road is not a bad one. And the snow is not settling at lower levels so I could have used a taxi. But for old time's sake and to catch a few views I just had to walk. This waterfall falls onto the road and the final photo is of the view through the mega EU bridge. 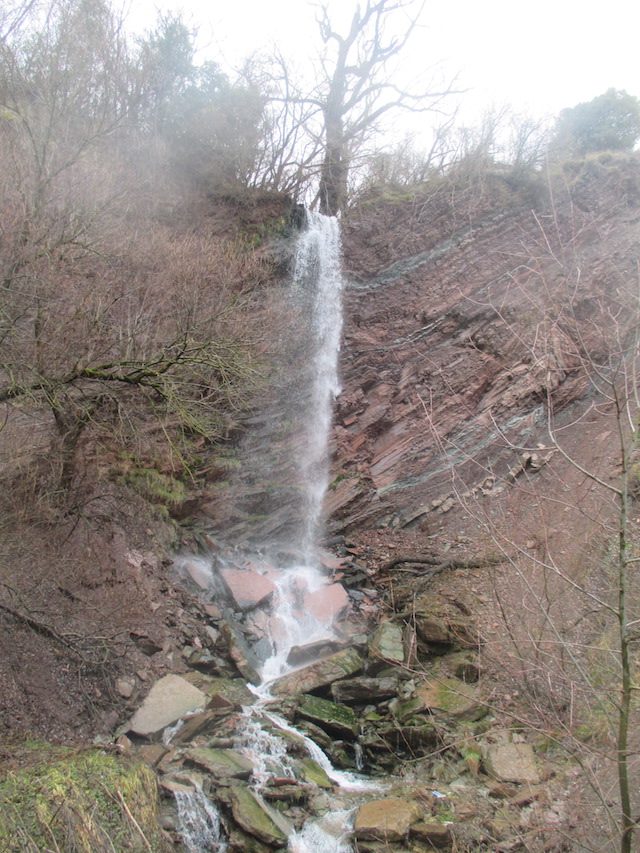 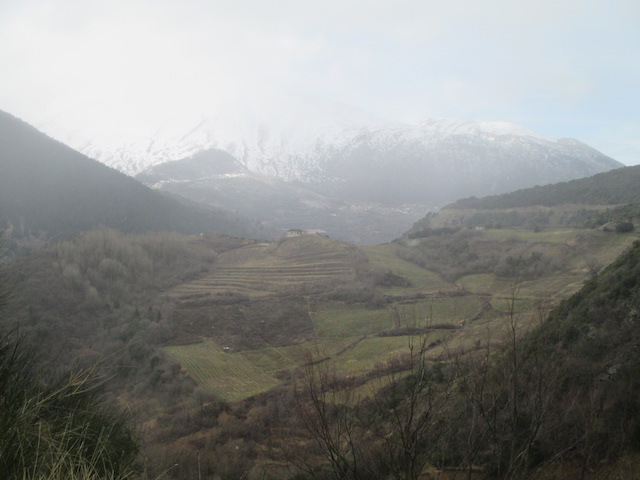 There were no wolves but at one stage a thin creature with black hair shot out ahead of me. Was it a weasel or a stoat or a pinemartin? I have no idea at all but before I had time to get out my camera it was gone.