Jon Snow of Channel 4 fake News bleats about Donald Trump exclusion but why not?

Jon Snow the uber liberal presenter of Channel 4 Fake News took to twitter last night bleating about how his channel was being denied access - along with others - from White House press briefings. I pointed out why this was fair on the part of the new administration. But do so again in more than 140 characters. Snow regards this ban as an attack on the free press. But why the hell should Trump pander to a new outlet which specialises in fake news about POTUS. I cite below a slam dunk and vile fake news C4 special from the last campaign. 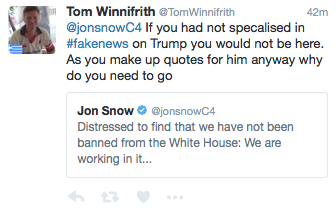 I think Snow means working on it.

Now to that fake news. C4's Washington reporter Kylie Morris ventured outside of the Beltway and went to a retirement village which was red hot for The Donald. In her report - which I exposed in full at the time - she described the retirement village where old folks have "found the American dream he is promising: its predominantly white and predominantly conservative"

Donald Trump at no point in the campaign or in his life promised a dream for America that is predominantly white.

Kylie and C4 put words in his mouth which were racist and that is fake news. Does Snow not realise how serious this is? And does he not accept that such slanderous fake news may have consequences?  The awful thing is that this was not a one off slip by a rogue reporter.

This was only one of many fake news stories run by Kylie or her nauseating colleague little Matt Frei during the campaign.

If C4 is content to slur Mr Trump by inventing things he said why does it need to attend press conferences? Surely it can just carry on making things up as it goes along. Kylie can just watch the press conferences on Fox News from her luxury apartment and then report back to the UK with some more made up quotes bearing no reality to what she has actually seen. That is how fake news works on C4.

Donald Trump is not assaulting a free press in denying folks like Kylie access to press briefings. She and C4 are free to report whatever they want. But in giving a seat in the briefing room to organisations that like to report what is actually said rather than just make things up to suit their own agenda what is Trump doing that is so bad?

Jon Snow can bleat all he likes,but until C4 starts to report real news rather than fake news when it comes to US politics why does the sanctimonious old fool expect to be treated any differently?