Emmeline Pankhurst, Countess Markievicz, hell even Germaine Greer, these were feminists who fought for something important and fought bravely. And still the struggle is not over. In many parts of the world women are treated shamefully, as sex slaves, as second class citizens as folks who have no rights. Think of FGM, think of the battles of Saudi women to have a voice and to avoid execution for crimes that are not crimes if you are a man, think of the way ISIS treats female captives. Gosh there are some real battles feminists - whether male or female - still need to fight.

But instead we see issues dodged by the liberal left as they skewer themselves on warped ideas of cultural equivalence. The greatest civil liberties campaigner of our time, Mr Peter Tatchell identifies one such example of this today on twitter. I can express my horror no better than Tatch.

And then we have news from Australia today of a victory for the women;s movement. Yes in Oz the battle has been won and we may indeed soe 50% of road crossings showing a woman not a man. Hell's teeth! Who cares a jot about this? It is such an utterly pointless crusade that one despairs at the feminists who wasted their time and money on this fight rather than tackling issues such as Female Genital Mutiliation or the rape culture of Southern Africa. 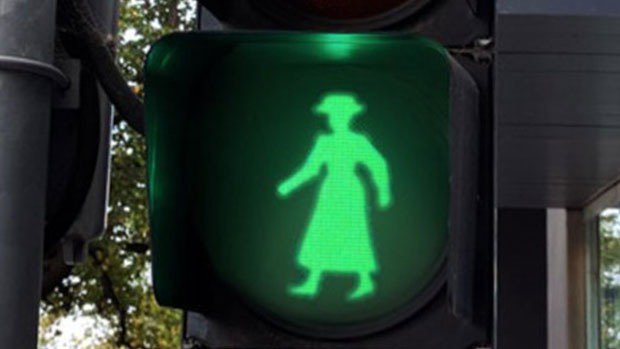 But then those real issues risk offending certain other minorities, those patriarchal societies where people just happen to be er...black. It is so much easier for the decadent Western liberal to fight for more women on road signs than to actually make the world a better place for women.

Perhaps having covered one Irish revolutionary who it is hard to admire earlier today I might end with a quote from one it is hard not to admire, a real feminist from 1916, Countess Markievicz. What on earth would she make of today's feminist. Over to the Countess with her advice to those who wanted to fight for liberty and equality:

"Dress suitably in short skirts and sitting boots, leave your jewels and gold wands in the bank, and buy a revolver."